Aengllog is a high-population, industrial world with a billion or more sophonts in population size.

The Cyan trade route running coreward to rimward through Okhuemgir Subsector once had a node at Aengllog in the past. When it was made public that the world had Balkanized into three Factions, one of which being a reclusive retreat for psionic Urzaeng Vargr, the Cyan route was detoured trailing, cutting a wide arc around this world. The trade thoroughfare cuts into Ungludh Subsector before returning to Gzugo (Gzaekfueg 1437) the subsector capital (Cp). This has caused much anger directed at the Psis Enclave but for the argument that Aengllog is already three parsecs distant from the nearest neighboring world. It is suggested by the local Psis and gently agreed with by the Mercantiles Faction that the route was already more efficient at a Jump-2 capability. For fear of mental intrusion by psionics, even the three Corsair Bases supporting a band in the subsector concentrates their piracy on the re-routed trade highway to trailing.

Aengllog has a F9 main sequence primary star and a Near Companion in the form of a bright M2 Red Dwarf. This dual-star pair in the skies over the mainworld had led to the development of timed polarization of viewport and window panes to simulate a full night when indoors. Else, the system is subject to a dim twilight hours each day with very few true nights when the Dwarf is eclipsed by a Gas Giant or resides on the far side of the system, behind the F5 primary.

Seven other planets hug to the primary in the Inner Orbits. The innermost Gas Giant holds a Satellite colony in the Hot edge of the Habitable Zone which sees hot seasons when it is not eclipsed by the Giant. The moon goes through month-long cold spells similar to wintery blizzards as it passes behind its parent planet. This moon is being developed by the mainworld Aengllog, most especially by the Psis Enclave Faction.

Breathing Filter required out of doors only, (not needed at Downport, Cities, Arcologies)

Lacking a satellite, Aengllog has only a Coriolis Effect to push storms and hurricanes onto land masses. Deep canyons and valleys shadow deserts as well as lush jungles and rainforests. Similarly, subduction of tectonic plates cause great undersea abyss to host lightless, benthic depths where only bioluminescence of large cephalopods roam. Though the atmosphere on Aengllog is Dense, (and Tainted from Industrial pollution), only a minimal Breathing Filter is required out of doors, on the steppes 1000 meters above sea level. Air is filtered indoors and inside the massive Arcologies found generally just above sea level on two of three continents. 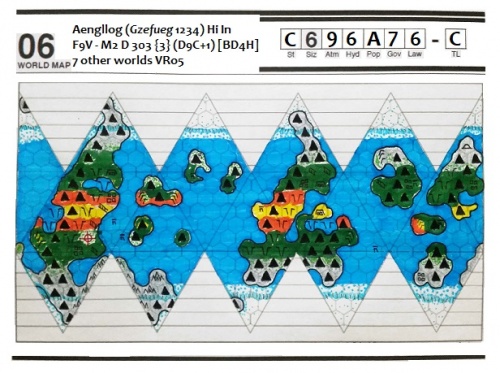 The world has complex life and well developed ecosystems.

Aengllog has a thriving agriculture of fishing, steppes farming and ranching and winged avian hunting. Despite the Tainted atmosphere, much of the pollution of this Industrial world slides downslope from the steppes communities to be filtered by the teeming jungles and forests just above sea level. Hunts for wildlife predators and herding beasts are a sport for the locals, particularly the Militaria Faction.

Though administered by charismatic dictators, or Alphas, sent as representatives from each Faction on Balkanized Aengllog, it is the affluent Mercantiles Faction that leads the mainworld agenda in the interstellar, Jump-4 neighborhood. Militaria Faction growls that there is a lack of work and so many leave the system to seek jobs in mercenary companies or to become Marines for the Ruler of Five Navy and its ongoing conflict with the Third Empire of Gashikan. The relaxed and peaceful Psis Faction continues its contribution of agriculture to Vegh Downs. The Psis test and train anyone who can afford tuition for a Stage of psionic training. Often this Faction is met by psion visitors who seek their next Stage in psionics unfoldment. How this third Faction stays in business is an enigma that the Mercantiles and the Militaria are beginning to suspect having to do with psionics itself. All three Factions continue to disagree on the future of Aengllog, but thus far conflict has not escalated beyond the negotiating table.

Aengllog has a Class C Starport, an average quality installation which includes amenities including unrefined fuel for starships, some brokerage services for passengers and cargo, and a variety of ship provisions. There is a shipyard capable of doing maintenance and other kinds of repair. Ports of this classification generally have only a downport, unless this is a trade port or system with an hostile environment mainworld.

Aengllog possesses a Technology Level of TL–12 or TL-C in Hexadecimal Notation.

Aengllog has a Balkanized Government. There is no central world government. The world has several governments competing for control of the world. These may be allies, cooperating, competitors, or at war with each other.

To the protesting Militaria Faction, the Law Level of Aengllog rests at 6, prohibiting all firearms save for shotguns and the wide variety of ammunition types. Many weapons outlawed on the mainworld see production, packaging and export before they can be perused by the locals.

Aenllog produces 1404 Resource Units or RU ('aryu') thanks to its Economics ratings.

The local demographic on Aengllog is almost entirely Urzaeng Vargr with occasional visits from Meshan Sector by Ovaghoun Vargr. Rarely do the Logaksu Vargr venture into this subsector except from rimward sectors as long-range mercantile efforts along the Cyan trade route.

Though Urzaeng is most commonly spoken, Ovaghoun dialect, Vilani, and occasional Anglic can be heard by Travellers at the Down- and Highport. Yilean is not politely spoken this far spinward of the Third Empire of Gashikan.

This list of sources was used by the Traveller Wiki Editorial Team and individual contributors to compose this article. Copyrighted material is used under license from Far Future Enterprises or by permission of the author. The page history lists all of the contributions.
Retrieved from "http://wiki.travellerrpg.com/index.php?title=Aengllog_(world)&oldid=646623"
Categories: