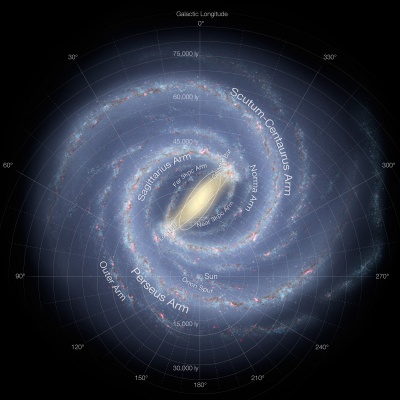 The Milky Way Galaxy (otherwise known as Galaxias or Dakhaseri) is the name given to the SB(bc)-type barred-spiral galaxy in which the stars of Charted Space reside. It is but one of the 2 trillion galaxies in the observable universe.

While Galaxias is almost as old as the universe itself (its oldest stars date to less than a billion years after the beginning of time), the majority of its stars are middle-aged and range between 6 and 10 billion years of age, and number between 200 to 400 billion star systems in total. Most of its stars have planetary systems with habitable zones capable of producing and supporting life.

The Sol Star System within Charted Space is located within the galactic disk, about 8,150 pc from the Galactic Center, on the inner edge of one of the spiral-shaped concentrations of gas and dust called the "Local Arm" (or occasionally the "Orion-Cygnus Spur" of the Sagittarius-Carina Arm), about 6pc North of the mean galactic plane. [1]

The stars within the central 1500 pc radius form a spheroidal bulge and one or more "bars" that radiate from the bulge. These elongated bar-shaped structures have a stellar density of over 50,000 stars per cubic parsec. At the very center of the core of Galaxias is a super-massive black hole named Sagittarius A* that masses approximately 4.3 x 106 MSol. Approximately 10 million stars orbit within 1.0 lightyear of this object.

Based on observations, Galaxias appears to have two "major" (higher-density) spiral arms (the Perseus and Scutum-Centaurus Arms) as traced by old stars, and four "minor" (lower-density) spiral arms (the Norma/Outer, Sagittarius-Carina, and the Near and Far 3kpc arms) as traced by gas and both old and young stars. Outside of the major spiral arms is the Monoceros Ring (or Outer Ring), a ring of gas and stars torn from other galaxies billions of years ago. Galaxias's stellar disk does not have a sharp edge beyond which there are no stars; rather, the concentration of stars decreases exponentially with distance from the center of Galaxias. For reasons that are not understood, beyond a radius of roughly 13 kpc from the center, the number of stars per cubic parsec drops much faster with radius.

The spaces between the galactic arms are somewhat less dense in stars, but have comparatively less gas and dust than the spiral arms themselves, and are thus not generally regions of active star formation. As a result, most stars here tend to be cooler older stars and stellar remnants. The spiral arms themselves are thus largely an "optical" phenomenon, as the abundance of very young hot bright stars in the star-forming regions of the "arms" causes these regions to "stand out" visually compared to the regions populated by older and cooler stars that permeate the majority of the galactic disk.

Galaxias has a number of satellite galaxies (including the Large and Small Magellanic Clouds, the Sagittarius Dwarf Galaxy the Virgo Stellar Stream, and the Canis Major Dwarf Galaxy) and is part of a cluster of galaxies known as the Local Group, which is itself a component of the Virgo Supercluster, which is a component of the Laniakea Supercluster. Galaxias is the second largest galaxy in the Local Group, the Andromeda Galaxy (M31) being larger.

Modern Imperial astrogational coordinates and directions within Galaxias are specified both by the latitudinal distance from the galactic core and longitudinal angle from a meridian that extends from the galactic core through a reference point defined by the central star of the star system known as Reference. Please see Galactic Directions and the appropriate section in the article Astrography for details.

Galaxias is home to Humaniti and hundreds, perhaps thousands, of other sapient non-human species. In some of Galaxias's systems, life has come and gone, and their worlds bear the marks of long-dead civilizations. In other systems, life has not yet arisen, though some day it may. But in many systems, worlds have produced intelligent life, known as NILs, with cultures and societies almost too strange to understand.

The following sophont species are rumored to have had their origin in a galaxy other than Galaxias, but the truth of these claims, and the likely galaxy of origin are matters of mere speculation.

The Vilani name for the Milky Way Galaxy is Dakhaseri, after an ancient Vilani story that tells of meritorious souls allowed to watch the events of the world; their discussions (and futile attempts to intervene) are the basis of many Vilani myths.

This list of sources was used by the Traveller Wiki Editorial Team and individual contributors to compose this article. Copyrighted material is used under license from Far Future Enterprises or by permission of the author. The page history lists all of the contributions.
Retrieved from "http://wiki.travellerrpg.com/index.php?title=Milky_Way_Galaxy&oldid=660469"
Categories: