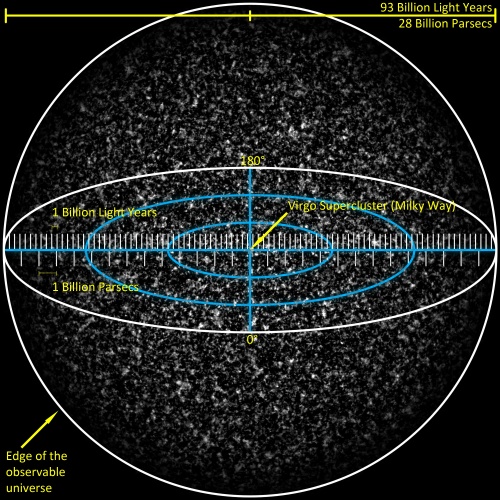 The Universe is the astronomical term for all of space-time and everything contained therein. Its true size and extent are unknown, but even its observable parts are incredibly vast and for all intents and purposes unreachable with TL-15 technology.

Due to the sheer size of the universe, no known race has fully explored the ends of the universe. What is known is mostly theory and conjecture based upon physical evidence from long-range observations by various sophont species over the course of millennia.

Though Jumpspace is sometimes described as an “alternate universe,” in reality all jump spaces, reachable or describable dimensions, and alternative realities whether finite or infinite exist within the "Universe" (or "Multiverse") as properly defined.

The dimensionality that we commonly experience in our everyday lives is usually referred to as "Normal Space" or "N-space", and consists of 4 dimensions: 3 of space and 1 of time. The era of modern physics dawned with the realization that there are more dimensions than these; modern cosmology places the number between 46-62 at a minimum, depending upon the particular theory of spacetime employed. Early 26-dimensional models of spacetime which only incorporated the "bosonic" force-carrying particle-fields had later been shown to be reducible to a 10 or 11 dimensional manifold in theoretical models encapsulating all known particles.

In those manifold models using 10-11 dimensions as their basis, the 6 or 7 extra dimensions (in conjunction with the 4 with which we are commonly familiar) typically manifest themselves as the fields associated with the 4 fundamental forces of nature (the gravitational, strong, weak, and electromagnetic fields) and are of dimensional-size comparable to the subatomic scale. An additional 36 have since been discovered that are comparable in scale, and are accessible only by jump drive.

Some modern Imperial theorists have suggested that the current model of jumpspace arising from the base-6 hierarchical model of 36 levels beyond the primary 10 or 11 dimensions of "normal" spacetime may in fact be mathematically equivalent to a base-9 model of cascading higher level jumpspaces, though this is currently still a matter of conjecture based upon theory. It is in fact possible that many other higher level dimensional manifolds may exist (in fact some theoretical models even suggest potentially an infinite number) which are as yet undiscovered by current Imperial science.

Jumpspace is related to normal Einsteinian space (or "N-space") in a non-linear fashion. As such, both velocity and positional information take on imaginary values for objects in jumpspace relative to Normal space, resulting in a transition from point-to-point in N-space with a typical expectation value of approximately 168 (±10%) hours (though the temporal probability curve extends along a steep normal distribution in both directions), the N-space distance of the jump limited only by the "weave" of the particular level of jumpspace with respect to the 4 dimensions of Einsteinian space. While in a particular "level" of jumpspace (or "J-space") the positional and velocity values for objects in the N-space universe have corresponding imaginary values relative to the object. Since t = d/v, the imaginary components of position and velocity cancel each other, yielding a common real-valued time coordinate in both the N-space and J-space environments. Thus, since gravity is uniquely a curvature of both temporal as well as spatial coordinates in Einsteinian-spacetime, the only interaction an object in a jumpspace manifold has with the N-space universe is the the complex-valued jumpspace "shadow" of gravitational sources in N-space that project into jumpspace via a complex non-linear (and not well understood) interaction. 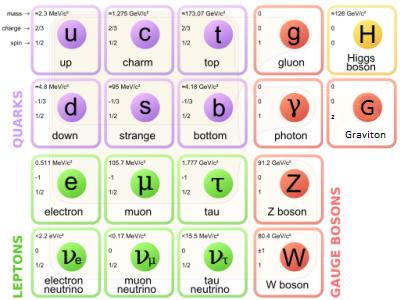 Particles should normally not exhibit rest-mass at all. However, when multiple particles are bound together through fundamental forces of nature, the potential energy associated with those forces (and the kinetic energy associated with the motion of the component particles) is the equivalent of mass, according to Einstein's equation E=mc2. Such "composite particles" (such as protons, neutrons, and other baryons which are composed of three-quark bound states) thus have an intrinsic mass associated with the binding energy of the quarks. Nevertheless, some "fundamental" (i.e. "non-composite") particles (such as quarks and leptons) also exhibit an intrinsic rest-mass thru a different mechanism known as the Higgs mechanism. Certain particles interact with a scalar-field distributed throughout spacetime known as the Higgs field. When particles which "feel" the Higgs field move through spacetime, they experience a potential energy associated with the interaction which manifests as a rest mass (again due to E=mc2).

All subatomic particles can further be subdivided into two broad categories based upon their intrinsic quantized angular momentum, or "spin". The spin of a subatomic particle is an intrinsic property of the particle itself, and is given in units of ћ=h/2π (referred to as "h-bar"). Particles with integer values of ћ are referred to as "bosons", and those with half-integer values of ћ are referred to as "fermions". The intrinsic properties of particles belonging to these two categories are distinct from one another.

Bosons (with integer vales of ћ) can have their wave-functions superimposed upon one-another "constructively" in multiple values of 2π-radians (or 360°). Thus their wave-functions can "sum", meaning that a theoretically infinite number can collapse into the same quantum state (this is why photons can form large-amplitude electromagnetic waves). Bosons can thus typically mediate forces as force-carrying particles in quantum field theories.

Fermions (with half-integer vales of ћ) will have their wave-functions superimpose upon one-another at some places "constructively" and at some places "destructively", thus interfering with one another. As a result, no two fermions can occupy the same quantum state without destructive interference of their wave-functions (this is known as the Pauli Exclusion Principle, which forces fermions to only be able to occupy certain spatial regions when they are found together in bound states, other spatial regions being excluded).

Galaxies are not distributed uniformly throughout the universe, but rather tend to clump together hierarchically in groups. 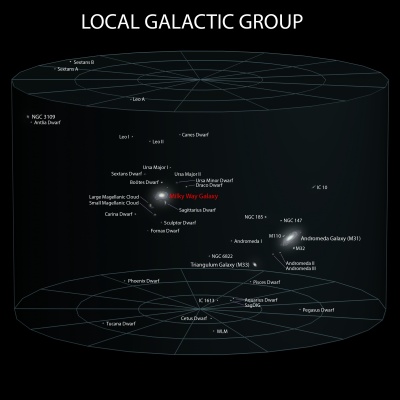 Galaxias belongs to a cluster of galaxies known simply as the "Local Group". The three largest members of the Local Group, in descending order according to size, are the Andromeda Galaxy (M31), Galaxias, and the Triangulum Galaxy (M33), the remainder of the Local Group being composed primarily of dwarf galaxies. The Milky Way subgroup of satellite galaxies centered on Galaxias contains more than 50 galaxies alone. In total, the Local Group contains at least 100 galaxies.

The closest members of the Local Group to Galaxias include: 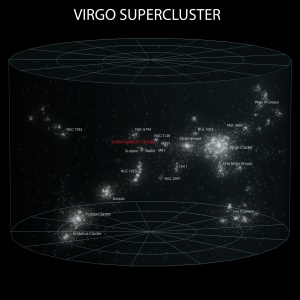 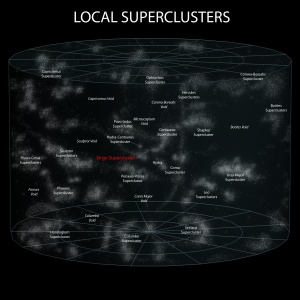 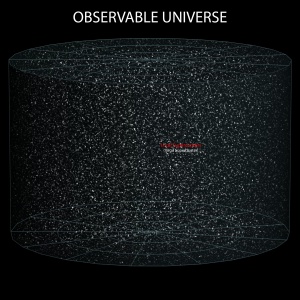 A Quasar ( "Quasi-Stellar Radio-Source") or Quasi-Stellar Object ("QSO"), is a very luminous active galactic nucleus ("AGN") composed of a "feeding" supermassive black hole and its accretion disk. The term "quasi-stellar" was coined by early Solomani astronomers before telescopes were powerful enough to resolve the surrounding galaxy as compared to the luminous and point-like electromagnetic radio source of the active galactic nucleus constituting the quasar. Quasars emit electromagnetic radiation across the spectrum from radio thru X-ray or gamma wavelengths primarily along two opposite-vectored "jets" with luminosities that can exceed 1041 W (far in excess of entire galaxies). A quasar is contained within a volume of approximately the size of an average star system. Measured distances to quasars place them at ranges of between 180 million to over 8 billion parsecs from Galaxias, implying that these objects appear as they did approximately 8-12 billion years ago, which is fairly early in the history of the Universe. Quasars are useful reference points for aligning astrogational coordinate systems, due to their extreme distance and effective lack of parallax.

Dark matter is a catch-all term for an inferred (and unidentified) type of matter whose existence (and gravitational influence) would explain certain astronomical observations including the observed motion, rotation, and structure of galaxies and some instances of gravitational lensing. The term "dark" refers to the fact that it does not emit or interact with electromagnetic radiation (which would otherwise make it observable thru telescopes), implying that it is invisible or "dark" to the entire electromagnetic spectrum. Almost 70% of the universe apparently consists of dark matter, based on indirect observation of its effects.

On the other hand, some astronomers speculate that the existence of dark matter is an erroneous inference, and instead argue for various modifications of the standard laws of general relativity in order to account for gravitational observations that do not require the invocation of the speculative existence of additional and unobserved forms of new matter.

Dark Matter should not be confused with Dark Energy, which is an apparently unrelated phenomenon.

None of the races, major or minor, have even explored more than a small fraction of just the one galaxy in which Charted Space is located, just one galaxy among the myriads of galaxies within the unfathomably large universe.

UNDER CONSTRUCTION: No information currently available

Heat Death of the Universe[edit]

UNDER CONSTRUCTION: No information currently available

This list of sources was used by the Traveller Wiki Editorial Team and individual contributors to compose this article. Copyrighted material is used under license from Far Future Enterprises or by permission of the author. The page history lists all of the contributions.
Retrieved from "http://wiki.travellerrpg.com/index.php?title=Universe&oldid=615946"
Categories: