Vargr Courier (Type VX): Using a custom 200-ton hull, the Vargr Courier is intended for transportation of messages and envoys rapidly over interstellar distances. It mounts Jump drive-C, Maneuver drive-C, and Power plant-C, giving performance of Jump-3 and 3G acceleration. Fuel tankage for 90.0 tons supports the power plant for four weeks plus one Jump-3. Adjacent to the bridge is a model/2 bis computer. There are four staterooms and no low berths. The ship has two hardpoints and two tons allocated to fire control. Installed on the hardpoints are two single turrets: Each mounts one beam laser. There is one ship's vehicle: A ship's boat. Cargo capacity is 5.0 tons. The hull is streamlined.

The Vargr Courier requires a crew of four: pilot, navigator, engineer, and medic. Double occupancy permits the addition of up to four others, such as gunners, emissaries, or other passengers. The ship is not intended for commercial passenger carriage. The Vargr Courier costs MCr128.872 (...including architect's fees, but not standard discount; prices may vary), and takes 12 months to build. 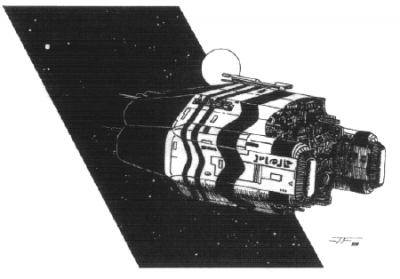 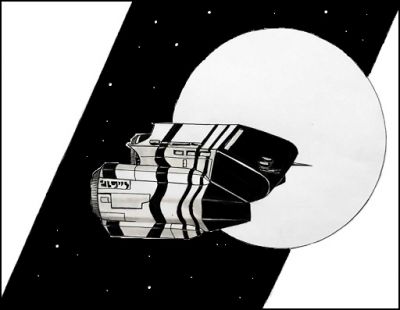 Using a 200-ton hull, the Vargr courier is designed for the fast transport of emissaries and messages over interstellar distances. The courier is generally used by military and government organisations for diplomatic and intelligence purposes.

The Vargr courier requires a crew of four; a pilot, navigator, engineer and medic. Four additional crew or passengers such as emissaries and gunners can also be carried with double occupancy.

Vessel Peculiarities: No information yet available.

This list of sources was used by the Traveller Wiki Editorial Team and individual contributors to compose this article. Copyrighted material is used under license from Far Future Enterprises or by permission of the author. The page history lists all of the contributions.
Retrieved from "http://wiki.travellerrpg.com/index.php?title=Tathoe_class_Scout/Courier&oldid=622577"
Categories: