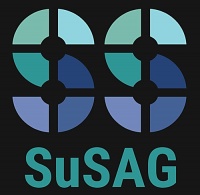 Schunamann und Sohn AG (SuSAG) concentrates on chemical, pharmaceutical, biological, and geneering industries. The company has expanded beyond healthcare to industrial processes and even military contracts, often to the detriment of its public image.

SuSAG is one of the thirteen Imperial MegaCorporations in operation in 1116.

Schunamann und Sohn AG, LIC: SuSAG engages in a wide range of chemical, pharmaceutical, and geneering activities. SuSAG is the primary manufacturer of anagathics for the Imperium, and maintains psi drug manufacturing plants in certain client states outside Imperial borders.

President, Board of Directors

Each Division is headed by a Vice-President and activities are controlled by Regional General Managers in each Division.

Because of the bad reputation for safety of its chemical/biological warfare division, the firm is not well liked in many regions, even though all of SuSAG's dangerous manufacturing plants and experimental stations are located on remote, uninhabited planetoids.

The New Era (Click Show to reveal)
The surviving Post-Collapse part of SuSAG has an equally spectacled past, with run-ins with Regency and Spinward Hinter governments over smuggling, production of contraband and illegal materials, and often boorish behavior by its management and private security services. In recent decades the company has been hurt by increasing competition; a failure to adjust to new technology and fund basic R&D has caused its profits and market share to slip, and its dominance has been eclipsed by rivals like General Mechanics and Sternmetal Horizons. The company maintains its headquarters at Glisten, and regional headquarters at Pretoria, Pikha and Neumann.

This list of sources was used by the Traveller Wiki Editorial Team and individual contributors to compose this article. Copyrighted material is used under license from Far Future Enterprises or by permission of the author. The page history lists all of the contributions.
Retrieved from "http://wiki.travellerrpg.com/index.php?title=SuSAG&oldid=660530"
Categories: