From Traveller Wiki - Science-Fiction Adventure in the Far future
< Campaign:BTC
Jump to navigation Jump to search 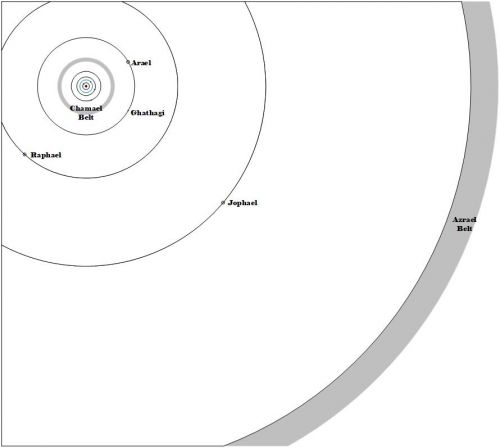 n.b. All moons are uninhabited – only Torricelli is listed

Kaesgus is a mining centre running huge mining machines that strip-mined ore bodies. Each mining machine is owned by a cooperative, and there are 158 registered cooperatives. All but two have closed down and the spaceport is slowly repatriating the members of the others. Those unable to afford passage (Cr 500/Head) are offered tickets by the 'Gabrael Government repayable through 500 hours of otherwise unpaid community service.

The nearby port-town, the main, and almost only permanent settlement on the planet, is made up of domes that support between ten and a thousand of the residents. There are 130 of these domes and 4 of these have collapsed. Three of the collapsed domes fell due to lack of maintenance after they were abandoned. The fourth, Dome 18, was destroyed in the raid by the Dzarrgh Federate in early 1138.

Dhon is uninhabitable and moonless

Torricelli is valueless rock. There is an automated landing beacon on it and several automated watch-stations.

Ghathagi is currently manned by a volunteer force of 8 because of the raid risk.

Mikael is subject to a debate as to whether this is a Large Gas Giant formed from the debris disk surrounding Hoggto at its formation or a small Brown Dwarf that formed at the same time as Hoggto.

1500km north of Tsabad, just north of the equator. Heavily faulted and rent by canyons as they are still being uplifted by plate movements.

Contains a small settlements of 5-10 families each - about 50% are Aekhu Vargr. 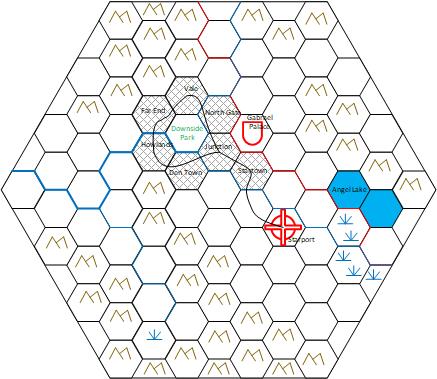 The Knight of Gabrael had a townhouse and small estate adjacent to the city known as the Gabrael Estate. This has been taken over by the Seneschal for her base overseeing the planet. The entrance is the "Gatehouse" in the map below. 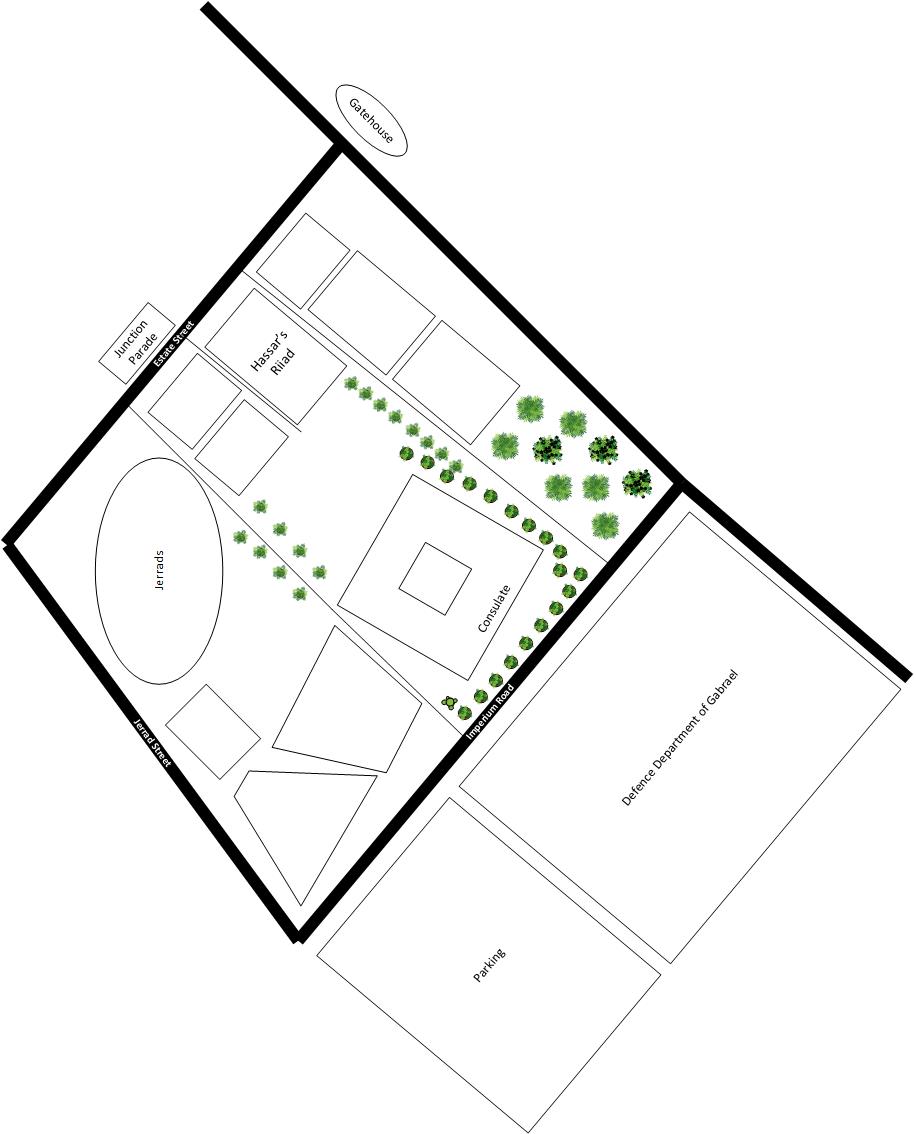 The estate of the Knight of Gabrael is known as the "Imperial Estate". This is a little developed area of the planet that contained the official residence of the planet's Imperial representative to the Moot. It is closed down as a result of the Abandonment.

About 50% of the population were evacuated between 1135 and 1136, and the Imperial Knight (Mikael Tukera-Asettaa) left with those refugees to oversee their settlement within the Regency. His sister (Arbellatra Tukera-Asettaa) remained to act as the on-world representative of the Imperium’s hierarchy.

The Starport's Downport contained a Planetary Navy Support area, construction and maintenance section, warehousing and transient section but did not have any accommodation other than for Naval/Marine personnel. The Naval Station has been cleared out and the infrastructure slighted.

The orbital construction facility (previously run by LSP) has been removed and the orbital and surface repair facilities have been reduced to a minimum and is running through its limited supplies quite quickly. Despite this, the world is understood to be maintaining a small SDB force.

The orbital component of the starport was moved into an approximate L2 orbit and is thus only visible to the surface habitations at night. The exact position moves slightly each day in a random direction as the remaining crew move it to prevent a long-range kinetic kill.

There is a fuel refinery, but this is now mainly aimed at producing fuel for local transportation and metropolitan power stations. Deliveries are by 10 dTon or 20 dTon trucks.

Gabrael’s economy has transitioned to a mostly agricultural society supported by a small number of specialist craft workshops and small factories.

Historically, Gabrael was a hub for four minor trade routes: -

The Dunmag route has collapsed because of the Abandonment. Tensas is still a port but the levels of trade are low and there are pirates using the system.

The Atsah route is still potentially open but Taproban has been closed as a port and the population withdrawn. Wyn is hosting a piratical group which makes this route difficult. However two subsidised ships do still operate.

The route to Khouth closed in 1117 when the Dzarrgh Federate captured the world. This then became a smuggling route controlled by Criminal and Intelligence groups and has become a refugee route in recent years – hampered by the closing of Arleshanu. The United Followers of Augurgh route has always been officially open, but became subject to unrestricted raiding from 1116 onwards. Convoys from Dunmag or Atsah – under Imperial Navy escort – would head to the UFA every 8 to 10 weeks. Very few free-traders would make un escorted transits. The exceptions were generally registered in the UFA and/or heavily armed.

The Lurent would also trade. Their ships are generally immune to nuisance raids by Vargr Pirates because of their size. Taking one of these vessels is akin to invading a small moon.

Current trade is limited to Lurent ships, Domestic shipping with the in-system colonies, the few Free Traders that are still operating, passing Doom Traders shipping refugees or selling salvaged goods, the Vargr (UFA) line Augurgh Theg and a subsidised route to Corfinium that moves only in convoy and is erratically timetabled.

The fact that 90% of the population lived in Tsabad, meant that the town itself is the largest market for on-planet goods. Little of the major foodstuffs for the planet needed to be imported and these formed the largest sector of trade by volume - just 0.5% of the population (all based outside the city) produced enough food to feed the rest of the world and drive the export trade.

There were 4 major transport systems on planet up until 1132

The Monorail connected each district of Tsabad, and to each other and to the Spaceport. It had a frequent passenger service, and the computer-controlled system had a myriad of small off-shoots for delivering to the main industrial and commercial centres.

Grav Vehicle transport sounds ideal for any planet, but the concern for accidents meant that the air-traffic was carefully controlled over Tsabad. The Spaceport became the main connector to the Monorail, and several Monorail stations had local landing pads and Grav Vehicle parking too. Within Tsabad, short distance transport was by a network of small wheeled vehicles - speed limits were low and the roads generally narrow.

Much of the planets Agricultural machinery was fully automated, guided by automated driver systems over large fields or plantations.

The decision to close down the planets main data networks and to prevent automatic wireless inter-communications between systems meant that between 1132 and 1138 there was a huge conversion of the local transport to manual control. Employment in the Agricultural sector exploded to nearly 1.2% of the population, and the role of driver, now required for Grav and Wheeled Vehicles, appeared as a significant economic factor. Coupled with a huge brain-drain this caused the Engineers and Mechanics on world to be in high demand. Many vehicles that could not (or were not) converted were scrapped: A huge supply of spares appeared.

After 1138, the transport was much more leaning towards the Wheeled Vehicles. This was aided by raids that regularly rendered the Monorail unusable and the fact that the air-traffic fell off as the computers that drove it were slowly decommissioned. The closing of the Starport to vessels not locally registered aided this move as the heavy-lift grav vehicles were less and less needed for cargo and were slowly reconfigured for crop-maintenance as the original specialist vehicles broke-down.

The following departments are known to exist within the government of Gabrael:

This list of sources was used by the Traveller Wiki Editorial Team and individual contributors to compose this article. Copyrighted material is used under license from Far Future Enterprises or by permission of the author. The page history lists all of the contributions.
Retrieved from "http://wiki.travellerrpg.com/index.php?title=Campaign:BTC/Gabrael_(world)&oldid=649913"