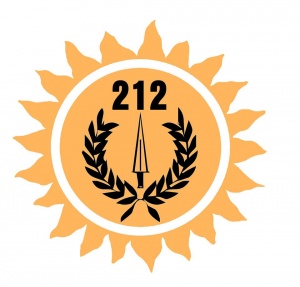 The 212th uses the same rank and grade system as the Imperial Navy.

The 212th Fleet was stationed in Rhylanor prior to the Fifth Frontier War and was regarded as the main source of reinforcements for front-line fleets. Consequently, it remained in place for the first months. It was then ordered to detach several squadrons (designated Task Force 17) to confront the invading Vargr Gireel and Uthith fleets at Beck's World in late 1107. The situation remain fluid and unresolved throughout 1108 and early 1109. In mid-1109, the Gireel Fleet was destroyed by Task Force 17 under Vice Admiral Elphinstone, and the Uthith Fleet was forced back. On 252-1109, the 40th Squadron negotiated a separate peace and withdrew from the subsector leaving a few recalcitrant Pirates in the area. The TF17 (now headquartered at Dentus) continued to patrol the border for the rest of the war and immediately thereafter. These border patrols established the reputation of cruiser Commodore Arabella von Ericsson[1].

In the post-war fleet shuffle, the 212th was moved to Jewell Subsector, taking over from the 125th Fleet, but leaving the 5277th Imperial Marine Regiment in the Aramis Subsector for 214th Fleet.

This list of sources was used by the Traveller Wiki Editorial Team and individual contributors to compose this article. Copyrighted material is used under license from Far Future Enterprises or by permission of the author. The page history lists all of the contributions.
Retrieved from "http://wiki.travellerrpg.com/index.php?title=212th_Fleet_(SM)&oldid=647114"
Categories: