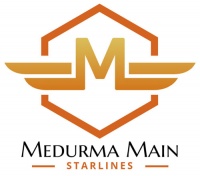 Medurma Main StarLines is a corporation operating out of Dagudashaag Sector.

Interstellar shipping corporation. Medurma Main StarLines, LIC (MMSL) is sector-wide subsidiary of Imperiallines running regular passenger and freight services to all A and B class starports on the Dagudashaag Main.

Medurma has a weighted three-part governance structure with elected officers who serve for variable terms based on their voting percentages.

The corporation is looking into funding smaller feeder lines and establishing a more comprehensive system of feeder lines.

MMSL ran a highly efficient feeder service throughout Dagudashaag Sector for centuries. The company did not originally handle passenger transport.

This list of sources was used by the Traveller Wiki Editorial Team and individual contributors to compose this article. Copyrighted material is used under license from Far Future Enterprises or by permission of the author. The page history lists all of the contributions.
Retrieved from "http://wiki.travellerrpg.com/index.php?title=Medurma_Main_StarLines&oldid=566045"
Categories: