The Verant is a creature lifeform that is not a sophont.

The Verant is a riding beast found throughout the Distant Fringe. The species, descended from swift predators native to Dhon (1511 Far Home), are loyal, hardy and aggressive. Verants are a popular choice of mount for specialist cavalry and scouting forces, particularly among units deployed to poorly developed or technologically backward areas.

The Verant's Head Nebula, in Argent Sector, is named for its supposed resemblance to the creature. 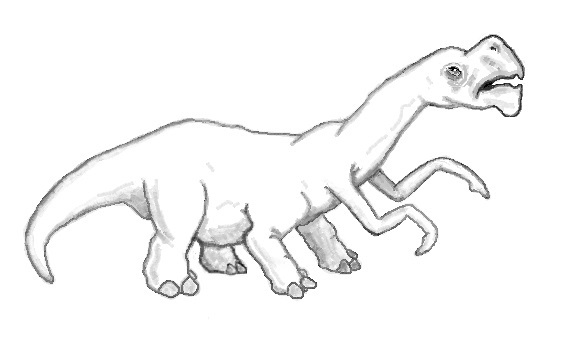 The Verant is a carnivore native to Forest terrain on Dhon, in Far Home Sector, but raised on worlds across the Distant Fringe. The Verant is a large standard chaser. It is a bilateral walker classified HS-TB-AN-LL-T: Verants have a beaked axe-shaped head, a long flexible neck with the brain case at its base, a torso with an anterior pair of grooming picks and two posterior pairs of motile legs, and a thick tail used to aid balance. Their primary weapons are their beak and their legs, which terminate in solid clawed feet. The body is characterized by a cartilage interior and is covered by fine scales. Interior fluids are ichor. The Verant is a forest terrain walker. Based on its Profile: typical, standard and large, the Verant is typically 3.5 m long, roughly 0.6 cubic meters, weighs approximately 600 kg, and stands around 2 m tall at the shoulder – the neck and head, when held upright, add another meter to its height. The Verant's speed is rated as standard: maximum speed is 60 kph (termed "sprinting"). A typical Verant has an Endurance of 8.

Verants live in small packs consisting of servile hunters dominated by a single powerful baron and serving a single queen. The pack spends much of its time patrolling a fixed territory in search of prey and seeing off intruders and rivals. When something of interest is discovered a Verant's primary instinct is to stalk and assess. If it is prey the hunters will launch an attack. Verants signal their position and intent to one another using loud clicks – an attack is not usually begun until the members of the pack are in suitable positions. When the moment is right the target is deliberately startled and as it flees the hunters chase it and match its pace, anchoring themselves onto the victim with bites from their powerful beaks and attempting to topple the target with their weight. Once the target is prone or stopped, it is mobbed and trampled with their feet and raked with their claws. Verants flee only if they are in immediate danger, preferring instead to retreat and observe from a safe distance. A hunter Verant is trainable: barons and queens are not.

When they are not patrolling, Verants spend much of their time sleeping (curled into a tight ball, facilitated by their cartilaginous interior) or grooming, using their spike-shaped anterior limbs to pick through scales and body creases in search of organic debris and parasites. Hunters, barons and queens habitually groom one another, which both cleans hard-to-reach body areas and reinforces their pack bonds. A domesticated Verant will attempt to groom its sophont in a similar way, forcefully checking through clothing and equipment. Scrubbing hard-to-reach areas of scales on a Verant (such as the base of the tail) with a tool like a stiff brush induces a state of euphoria in the creature.

There are three genders: male (barons, 5%), female (queens, 5%) and asexual neuters (hunters, 90%). Both barons and queens are noticeably larger and stronger than hunters, typically weighing around 800 kg. Queens lay leathery foetal sacs in camouflaged nests soon after fertilisation: the nesting area is called the court. Whelps hatch after an incubation period of approximately 5 months and remain helpless for a further two months, relying on the baron and the queen to see to all of their needs during their development. Queens remain within the court at all times, though barons will occasionally move away to deal with threats and challenges.

Whelps hatch as either females or neuters. Over the course of their first year, as they grow into adolescents, the neuters test and fight one another constantly. The strongest member of the litter becomes a new baron while the remainder become hunters. Queens may choose to kill female whelps and adolescent barons in order to avoid challenges for dominance within the pack. The adolescents continue to strengthen and develop until they reach sexual maturity at around 3 years of age. Hunters protect territories and hunt for food, returning a large part of their kill to the court. Hunter Verants typically live for 25–30 years: barons and queens may reach 50 years.

Verants are carnivores, preferring to consume fresh meat from a large kill. The beak is used to tear lumps of flesh from the body, which are swallowed whole. They are not fussy eaters and will happily consume smaller animals if they can be caught, and if they are desperate they will also eat carrion. Verants are also partial to sweet morsels: in the wild they will supplement their diet with fruits and berries when they find them. Domesticated Verants have a reputation for getting into supplies, using their beak to split and tear through cases and packaging in order to get to candy or other treats.

The beak is the Verants main manipulator. It can exert considerable pressure – large barons and queens have been shown to have a bite force in excess of 4000 newtons, enough to shear through armored hides and large bones. The tip of the beak is hooked and the edges are sharp, allowing the Verant to slice deeply into the body of a prey animal and hold itself in place while it disables its victim with its legs. The beak is also capable of incredible dexterity: a Verant is able to pick up an item as delicate as an egg without damaging it.

Verants were first domesticated sometime after 2256AD, when Dhon (1511 Far Home) was initially settled by humans. A formation of Verant riders became de rigeur for planetary armed forces during the Second Confederation: units of Verant-mounted Lancers and Dragoons were used during the civil wars. There are now only a few thousand wild Verants remaining on their homeworld, all living within large protected forest reserves in the southern hemisphere of the planet, though millions of domesticated creatures are employed throughout the Distant Fringe as riding and draught animals. Small populations of Verants became feral during the Dark Age – on a few worlds their descendants still roam wild.

The Verant is marginally edible by humans; its flesh, though nutritious, tastes bad and generally causes a gagging reflex. Strips of heavily seasoned dried meat are considered palatable. Consuming Verant meat can cause severe gastric distress in some humans.

Only hunter Verants can be trained - barons and queens are too independently-minded. Hunter Verants are difficult and recalcitrant pupils, though training a group of Verants together is generally easier than training an individual animal - they are able to learn from one another as well as the trainer. Once the trainer has established themselves as the hunter's court (effectively forming a new pack with themselves as the baron) the creature becomes subservient and compliant. It also becomes generally tolerant of the trainers' sophont species.

Verants are well-known for being surly and bad-tempered. They may snap at unfamiliar individuals – losing a finger to a grumpy Verant is not uncommon. Temperament and cooperativeness varies with individual creatures. Even the most well trained Verant should not be left unattended around other animals.

The Travellers' Aid Society (TAS) classifies the Verant as dangerous to most sophonts. Caution is advised regarding this creature.

This creature can primarily be found in the following areas:
Uncharted Space - Distant Fringe:

This list of sources was used by the Traveller Wiki Editorial Team and individual contributors to compose this article. Copyrighted material is used under license from Far Future Enterprises or by permission of the author. The page history lists all of the contributions.
Retrieved from "http://wiki.travellerrpg.com/index.php?title=Verant&oldid=512804"
Categories: