Steve Jackson Games (SJG) is a game company that creates and publishes role-playing, board, and card games.

Overview Synopsis: The Imperium Eternal, or Lorenverse, is a setting in which the Third Imperium avoids the assassination of Strephon, and does not fall until after the Wave passes through it.

In this setting there is no Second Civil War or Rebellion. Archduke Dulinor's ship is destroyed in 1116 en route to Capital, which sparks an investigation that unwinds over several TNS entries. 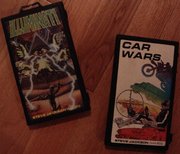 This list of sources was used by the Traveller Wiki Editorial Team and individual contributors to compose this article. Copyrighted material is used under license from Far Future Enterprises or by permission of the author. The page history lists all of the contributions.
Retrieved from "http://wiki.travellerrpg.com/index.php?title=Steve_Jackson_Games&oldid=611680"
Categories: