Horvath's Pony is a creature lifeform that is not a sophont.

Horvath's Pony (usually just called a Pony) is found throughout the Distant Fringe. The species is descended from Terran horses (Equus caballus) that were originally grown in GenPods. The Pony is versatile, adaptable and fills a wide variety of roles, particularly in poorly developed or technologically backward areas. Named for Emil Horvath. 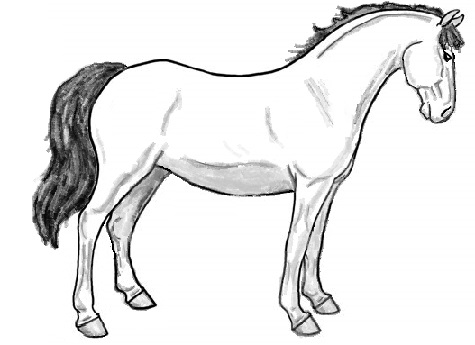 Horvath's Pony is a herbivore descended from horses native to plains terrain on Terra (1827 Solomani Rim) but raised on worlds across the Distant Fringe. The Pony is a large slow grazer. It is a bilateral walker classified HBS-T-LN-LN-T: Ponies have a long narrow head, a muscular neck, a stocky torso with paired legs at either end, and a thin tail. Their primary weapons are their legs, which terminate in hard hooves. The body is characterised by a bony interior and is covered by furry skin: the neck and head have a narrow lateral mane and the tail is entirely covered in long hair. Interior fluids are blood. The Pony is a clear terrain walker. Based on its Profile: thick, standard and large, the Pony is around 2.5 meters long, around 3 cubic meters in terms of physical volume, weighs around 700 kg, and is typically around 1.6 meters tall at the shoulder – the neck and head, when held upright, add another meter to its height. The Pony's speed is rated as slow: maximum speed is 50 kph (galloping). It may also trot (at around 15kph) for periods of around an hour. A typical Pony has an Endurance of 10.

Horvath's Ponies are herd animals. In small groups they are generally calm and passive, spending much of their time grazing. Their primary instinct is to flee from danger. If a Pony fights it rears and plunges, attempting to kick and trample a foe. Ponies may occasionally bite or kick without provocation. A Pony is trainable.

There are two genders: male (stallions) and female (mares). Foals are born after a gestation period of approximately 11 months. Foals are able to stand within minutes of birth and can gallop within a day. A Pony grows from a foal to an adult-sized animal in around a year, and continues to strengthen and develop until it reaches sexual maturity at around 2 years of age. A Pony will typically live for 25–30 years in the wild, though domesticated animals may live for more than 40 years.

Horvath's Ponies are grazers and spend much of their time consuming grasses or similar area-producing vegetation: the species are known for their hardiness and their digestive tolerance for a wide variety of plant types. In addition to their natural grazing they will happily eat grain, some fruits and other plant-derived foodstuffs. In the wild, small herds of Ponies slowly migrate in order to avoid exhausting the local flora.

The very first Ponies within the Distant Fringe were grown in GenPods from embryos that had been carried aboard the Last Armada. Emil Horvath, an early member of a prominent Five dynasty, founded stables and stud programs to breed Ponies on Uffan, in Halcyon Sector, during the early 24th century. Ponies - familiar and reliable Terran creatures with relatively similar needs to humans - became ubiquitous within the Second and Third Confederations and throughout the Distant Fringe region. Large numbers of Ponies became feral during the Dark Age - their descendants still roam wild on many worlds.

Horvath's Ponies are the standard species of horse within the Distant Fringe, though there are many other breeds descended from them. Most notably, large numbers of Brobdees, a particularly large and powerful breed of Pony, are used within the Yimin Jiti state. On some worlds humans prefer to employ camels, another transplanted Terran species, which have a greater tolerance for marginal environmental conditions. Military and Security forces within the Distant Fringe prefer to utilise Verants as their riding beasts.

The Pony is edible by humans; its flesh tastes pleasant, though humans tend to have an irrational aversion to eating Pony meat. The skin can be used to make leather and hair from the mane and tail is used for a variety of purposes.

Ponies are relatively easy to train and are generally placid and docile, though their temperament and cooperativeness varies with individual creatures.

The Travellers' Aid Society (TAS) classifies Horvath's Pony as harmless to most sophonts. It makes no special advisory regarding this creature.

This list of sources was used by the Traveller Wiki Editorial Team and individual contributors to compose this article. Copyrighted material is used under license from Far Future Enterprises or by permission of the author. The page history lists all of the contributions.
Retrieved from "http://wiki.travellerrpg.com/index.php?title=Horvath%27s_Pony&oldid=664578"
Categories: