The Last Armada was a Terran Phoenix Expedition.

The Last Armada existed from 2147AD to 2255AD. Its constituent vessels were constructed between around 2100AD and 2147AD, at both Terran Confederation shipyards and covert facilities lying within systems to rimward of the Confederation. The project was carried out under the aegis of the Expedition, a large-scale secret enterprise that was almost exposed on a number of occasions.

When the Ziru Sirka began their nuclear bombardment of Terra in late 2147AD the Last Armada departed, carrying with it the last remnants of Terran culture and independence.

A great deal of information gathered by the Armada, including astrographic charts and data that detailed its progress rimward-trailing from Terra, was lost with "Cutting the Ties". Much of what is known of the Last Armada is drawn from the Zelig Journal, a document that survived this purge.

The composition of the Last Armada is not known for certain, though every ship appears to have been built as a long-range vessel (a vessel with adequate onboard fuel for multiple jumps). The majority were transports carrying vast amounts of materials, equipment, tools, and supplies.

Other vessels of the Last Armada included:

Every major vessel carried GenPods – Artificial Gestation Units. Huge numbers of these devices were taken, along with vast banks of carefully preserved embryos to grow within them. These biological repositories contained humans as well as many species of animals (such as horses) and were instrumental in establishing and rapidly increasing the human population of the Distant Fringe.

Phoenix Expeditions were Terran long-range colonial ventures that started before the First Interstellar War and continued throughout the 22nd century. The concept was to send self-contained colony ships into areas far beyond Vilani space. They were named after a mythical bird that was reborn from the ashes of its own destruction - each expedition carried the tools and supplies to establish a new Terra, and carried with it the records and history of the old.

The expeditions were charged with finding suitable worlds as far from Imperial influence as possible, and to start settlements on then. They were expected to be out of contact with Terra for generations, and for security reasons were ordered to be cautious about re-establishing contact with the homeworld.

The Last Armada was prepared in utter secrecy in the systems lying to rimward of Terra. It launched equally covertly when it received word of the Vilani nuclear bombardment of Terra (remembered as the Destruction of Terra). It is believed that the Armada started with around 75,000 refugees and crew aboard. Their epic flight to the far end of the Orion Spur lasted for more than a century and took a terrible toll on the ships, their crews, and the refugees that they carried. They were at the very limit of their endurance when they finally crossed into the Empty Stars cluster and settled the Demon Cluster, which eventually became known as the Distant Fringe.

The total surviving settlers and crew who reached the Distant Fringe numbered 55,000, though the vast majority of these individuals spent the whole journey in cold sleep. Much of what is known of the Last Armada comes from the Zelig Journal, a document that survives from the time.

Towards the end of its journey the Armada met a friendly sophont species that were able to offer technical assistance, repairs, supplies, and a respite from the rigors of the voyage. They are remembered as the Angels of the Rift. The exact location of their homeworld is unknown.

The commanding officer of the Armada was Admiral Patience Laurent. She is frequently referred to in the Zelig Journal. 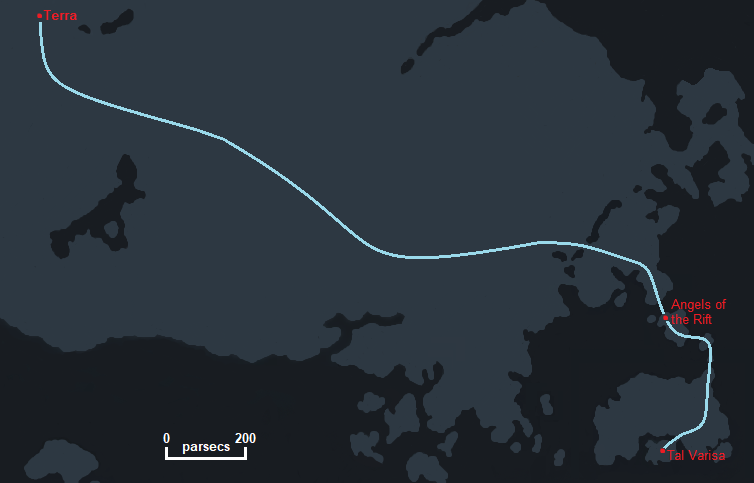 The likely route of the Last Armada.

The Cripple Fleet is a collective name given to those vessels of the Last Armada that didn’t make it all the way to the Demon Cluster, instead breaking down en route, misjumping, or otherwise falling behind. Historians argue that there are very probably human-settled worlds within the Where The Stars End region, most likely within its rimward parts, populated by descendants of the Cripple Fleet. These are referred to as Lost Settlements: one reputed example is a supposedly fictional state called the Lords of the High Realm.

The Dissident Fleet is the name given to a faction of the Last Armada that didn’t want to stop in the Demon Cluster, instead choosing to press onward to spinward, following the edge of the Great Void. It is reputed to have recovered Slaver technology and established the fabled realm of Lon Beon. Historians argue that there are very probably human-settled worlds within the Infinitys Shore region, most likely within its rimward parts, populated by descendants of the Dissident Fleet.

This list of sources was used by the Traveller Wiki Editorial Team and individual contributors to compose this article. Copyrighted material is used under license from Far Future Enterprises or by permission of the author. The page history lists all of the contributions.
Retrieved from "http://wiki.travellerrpg.com/index.php?title=Last_Armada&oldid=598497"
Categories: