Angels of the Rift

The Angels of the Rift are a technologically advanced psionic sophont species. They are remembered as having a humanoid appearance. Their current status is unknown.

The Angels of the Rift was the name given to a technologically advanced psionic race encountered by the Last Armada as they followed the Desolate Path. They are termed Angels because of their kindness and generosity in a time of hardship rather than their having any similarity to mythological entities. They were last encountered more than three and a half millennia ago.

Some modern interpretations of the Angels of the Rift depict them as having wings and even halos. No mention of any such physical features exists in contemporary references.

Their system's primary was a yellow main sequence star, similar to Sol. It lay on the coreward edge of the Salvation Cluster. The mainworld orbited within the habitable zone and had a UWP similar to that of Terra. The surface gravity was slightly lower and the atmosphere was rated as Standard, though containing a slightly lower percentage of oxygen. It was almost certainly a garden world, rich with life.

The Angels' home system is remembered within the Distant Fringe as a mythical sanctuary and a paradise. Although its true name has been lost to time, their homeworld has become known as Elysium.

The Angels of the Rift are described as having a generally humanoid appearance. What descriptions exist mention them as being tall, with a height of approximately 2 meters, with a slender build and with a bright, glowing quality to their skins. They shared a generally similar environmental niche and nutritional needs with humans and their sensory capabilities were broadly parallel. Their limbs and manipulators were similar enough to those of humans that they could use human equipment with only minor modifications.

The Angels were psionically capable and were able to reveal psionic abilities to the humans of the Last Armada. They are thought to have been particulary adept at "Awareness", the psionic manipulation of their own physical bodies.

When they were first encountered, the Angels of the Rift were at approximately TL–7. They had developed spaceflight and their homeworld had a number of orbital facilities as well as interface craft. They had explored most of the secondary worlds within their home system using robotic probes but had no FTL capability. 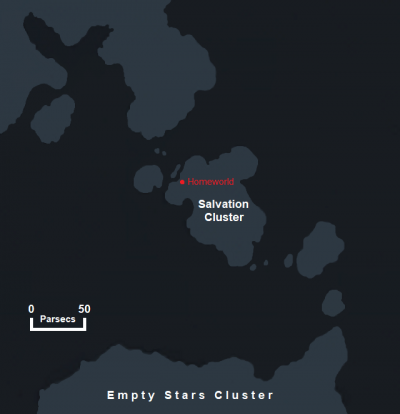 An astrographic chart showing the presumed location of the Angels' homeworld.

After an extremely tentative first contact, the Angels proved to be friendly and generous and were able to assist the Armada with vital supplies and repairs. They shared their understanding of psionic abilities, developing techniques and training that unlocked psionic potential in humans.

The Last Armada left the Angels' home system circa 2180AD, having spent nearly two years there. Much of what is known of the Angels comes from the Zelig Journal, a document that survives from the time. A significant number of humans - possibly numbering thousands - chose to leave the Armada and remain behind with the Angels. Their ultimate fate remains unknown.

This race is primarily located in the following areas:
Uncharted Space - Salvation Cluster:

This race can be found on the following worlds and systems:

No world articles for Angels of the Rift

This list of sources was used by the Traveller Wiki Editorial Team and individual contributors to compose this article. Copyrighted material is used under license from Far Future Enterprises or by permission of the author. The page history lists all of the contributions.
Retrieved from "http://wiki.travellerrpg.com/index.php?title=Angels_of_the_Rift&oldid=600910"
Categories: