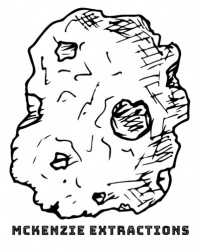 McKenzie Extractions is a corporation operating out of Dagudashaag Sector.

This corporation is governed by a multi-part council representing company and investor interests.

Appreciating the environmentally approach and political equities involved in any mining operation taken by McKenzie Extractions and the innovation shown in its subsidiary, Clan McKenzie Enterprises, Zirunkariish executives approached the McKenzie Family and provided a superior valuation and gathered the investors of: themselves (17% equity), the Shiishuginsa family (7% equity), and Naasirka (13% equity).

The company was the brain child of Malcolm Xavier McKenzie. He was responsible for the invention of a grav filter reclamation system, still in current use. The company is currently controlled by Malcolm's grand-daughter Lady Flyonna Mikaela.

This list of sources was used by the Traveller Wiki Editorial Team and individual contributors to compose this article. Copyrighted material is used under license from Far Future Enterprises or by permission of the author. The page history lists all of the contributions.
Retrieved from "http://wiki.travellerrpg.com/index.php?title=McKenzie_Extractions&oldid=566068"
Categories: