Haradin is a pre-agricultural, moderate population rich garden world with over a hundred million, but not yet at a billion sophonts in population size.

The Haradin system lies on the rimward border of Mavuzog Sector.

A diagram indicating the positions of all of the major worlds and satellites in the system.

This world is a Meso World between 12,000km and 13,500km in diameter. The world has a standard gravity between 0.8G and 1.1G. The horizon will appear about 5.1km away. Vessels with 1G of thrust should check with local starport authorities before attempting to land using emergency power.

This world has a pressure of 0.71 to 1.49 atmospheres. A Standard Atmosphere does not require survival gear and will likely be easy for most sophonts to breathe.

This world has 65-75% of its surface covered by liquid water. It has significant large liquid bodies. Wilderness refueling is possible.

A simple map of Haradin showing the major landmasses, highland regions, the seas and lakes, and the polar icecaps. 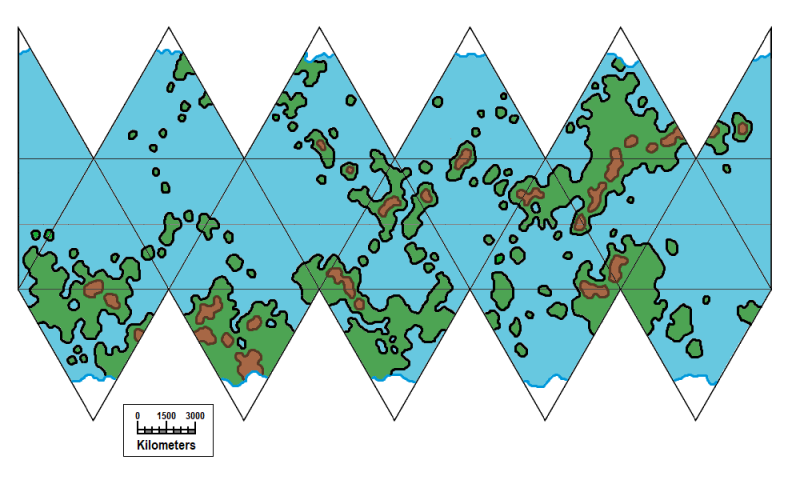 Haradin has a Class B Starport, a good quality installation which includes all the expected amenities including refined fuel for starships, brokerage services for passengers and cargo, and a variety of ship provisions. There is a shipyard capable of doing annual maintenance, overhauls and most kinds of repair, and construction of non-starships. Most ports of this classification have both a Highport and a Downport.

Haradin has a Balkanized Government. There is no central world government. The world has several governments competing for control of the world. These may be allies, cooperating, competitors, or at war with each other.

Haradin has a moderate level with laws covering many areas of government and interaction. These laws are simple enough that most people can act as their own advocate, though for serious issues a professional is recommended. Law enforcement officials will be present, but not in great numbers. Personal concealable firearms, and anything more destructive, are typically regulated or prohibited.

A small standing army, largely consisting of specialists and technicians.

The world hosts a major base and depot for the Talokan Trade Authority.

This list of sources was used by the Traveller Wiki Editorial Team and individual contributors to compose this article. Copyrighted material is used under license from Far Future Enterprises or by permission of the author. The page history lists all of the contributions.
Retrieved from "http://wiki.travellerrpg.com/index.php?title=Haradin_(world)&oldid=660129"
Categories: