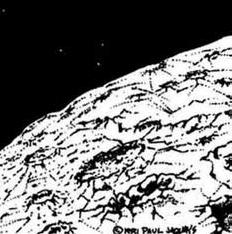 A Natural Satellite is a natural body in orbit around a world.

A natural satellite, often called a moon, is an astronomical body that orbits a world. Satellites always have a lower mass than their parent world and usually have a smaller diameter.

A satellite and its parent world orbit a barycenter, their center of mass: this is the point around which they both orbit.

Satellites may be individually named (such as Terra's satellite Luna), or they may simply be given a designation.

Satellites are classified as major (created as part of the star system generation sequence) or minor (...almost always very small bodies captured by the parent world, and considered too small or insignificant to have their own separate details within the system description).

A satellite's orbital distance from its parent world is measured in multiples of the parent world's diameter.

Satellite orbits are identified by alphabetic letters in the following sequence:

This list of sources was used by the Traveller Wiki Editorial Team and individual contributors to compose this article. Copyrighted material is used under license from Far Future Enterprises or by permission of the author. The page history lists all of the contributions.
Retrieved from "http://wiki.travellerrpg.com/index.php?title=Natural_Satellite&oldid=684122"
Categories: