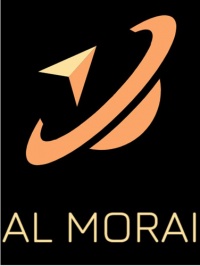 Based on Mora, the merchant line Al Morai originally serviced the Spinward Marches, with routes to the Deneb and Trojan Reach as well.

Non-canon: Al Morai is a Class 11 Imperial corporation; in other words, its income is in the hundreds of billions of credits. In addition to its X-Boat operations, it operates feeder lines in the Mora and Star Lane subsectors.

Each subsector operation is likely to be composed of something like this:

Established in 75 as a local transport company serving systems within ten parsecs of Mora, the company expanded by 120 to handle freight and passengers on a larger scale.

The Rebellion-era environment has provided Al Morai with many growth opportunities, making them one of the most prominent carriers in the Domain of Deneb.

This list of sources was used by the Traveller Wiki Editorial Team and individual contributors to compose this article. Copyrighted material is used under license from Far Future Enterprises or by permission of the author. The page history lists all of the contributions.
Retrieved from "http://wiki.travellerrpg.com/index.php?title=Al_Morai&oldid=648461"
Categories: