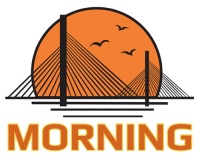 Morning-STR LRC is the Regency's third largest company out of Deneb Sector, and one of the so called Big Five.

Morning-STR is headquartered and intimately linked with the fortunes of Vincennes.

The company "backpedaled" many of its TL-16 products to lower tech levels and aggressively marketed them to other worlds and on the general market to obtain a market share in anticipation of the lifting of the TL-15 cap. Like LSP and Adamantium, Morning-STR is a general manufacturer, though its product line is a full quantum leap ahead of its rivals in many cases. The company makes nearly as much money assisting other worlds in working their own way to the TL-15/16 boundary, and it is thought that when the cap is lifted, the company will probably overshoot its rivals into markets where it holds an overwhelming technical and industrial lead. The company is not content to rest on its laurels in the face of intensifying competition, and it is a dangerous rival to any would be TL-16 manufacturer.

This list of sources was used by the Traveller Wiki Editorial Team and individual contributors to compose this article. Copyrighted material is used under license from Far Future Enterprises or by permission of the author. The page history lists all of the contributions.
Retrieved from "http://wiki.travellerrpg.com/index.php?title=Morning-STR&oldid=566222"
Categories: