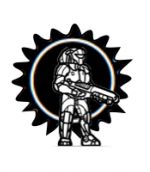 A Lift Infantry Regiment, formed to be space-mobile and available to reinforce local Ground Force Command units in an emergency.

The unit was raised in 850 from Volunteers in the Khouth Cluster, and some say that it hasn't been re-equipped since.

Raised in the Khouth Cluster in 850 the unit was a space-mobile Imperial Army Strategic Reinforcement Regiment and was moved to Arleshanu in neighbouring Deneb Sector in 986 as part of the Third Frontier War stabilisation efforts along the Vargr frontier. At the end of the war it was moved to Tensas, and there it languished for 150 years. While tactically it was part of the Million Subsector defence forces, it was strategically a unit "On-Loan" from Corridor Sector command. Thus, while it was able to find replacements for its decaying equipment locally, it was never funded for an upgrade. By 1116 it was able to field three battalions of infantry troops, but only had a full APC component for the first battalion - and they were still operating at TL–13 equipment when the rest of the reserves were TL–14 or above.

It was for this reason that , during the Rebellion, the troops were deployed as support for the Imperial Marines for raids into Vargr territory. They could provide the bodies needed for light-infantry actions that didn't need the full armoured firepower. Thus they helped in the 1127 raid on Khouth by providing security troops for the urbanised orbitals of that planet.

The Regiment was deployed in RQD3 during the Abandonment, supporting the 61st Fleet by providing security troops escorting the leaving civilians. It was withdrawn from the line in 1138 for re-equipment to TL–15. The quiet life-ended with the Virus incursions that started in the 1140s and it was heavily engaged in the Antra Pocket War.

This list of sources was used by the Traveller Wiki Editorial Team and individual contributors to compose this article. Copyrighted material is used under license from Far Future Enterprises or by permission of the author. The page history lists all of the contributions.
Retrieved from "http://wiki.travellerrpg.com/index.php?title=229th_Imperial_Army_Lift_Infantry_Regiment&oldid=620708"
Categories: