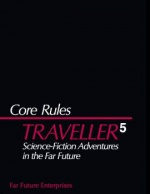 Traveller was initially designed as a generic science fiction RPG system, and the original setting was just one the designers favored out of the various available settings. While referees were encouraged to use the parts they wanted and change what they did not like, the wealth of background material made the Charted Space setting ubiquitous.

Some of the various versions are related to one another in terms of rules. For example, classic Traveller, MegaTraveller, and Mongoose Traveller use similar rule systems, with MegaTraveller being the most "variant" of the group. In addition, TNE uses the second edition Twilight rules system, T20 is based on the D20 license game system, and the GURPS versions and Hero versions use GURPS and HERO System, respectively.

In addition to the core publisher, several of the editions had material produced by other publishers. In many cases, these additional publishers were officially licensed by the original publisher.

This list of sources was used by the Traveller Wiki Editorial Team and individual contributors to compose this article. Copyrighted material is used under license from Far Future Enterprises or by permission of the author. The page history lists all of the contributions.
Retrieved from "http://wiki.travellerrpg.com/index.php?title=Versions_of_Traveller&oldid=690116"
Categories: