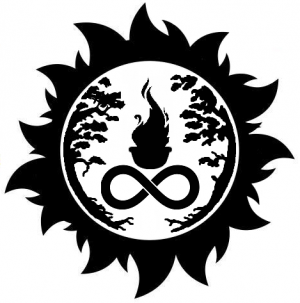 The Star Trigger was a massive scientific project that went wrong.

The Star Trigger somehow caused a nova in Tarnis, the primary star of the star system that is the homeworld of the Darrians, Darrian (world). The nova devastated the Darrian civilization causinng an apocalyptic event known as the Maghiz.

About -1000 the government of Darrian began a research project into the life cycle of Tarnis, Darrian's sun. Expeditions to other systems in the Spinward Marches had shown some anomalies between theory and actual measurments of stellar energy output; scientists were worried about the predicted life of Tarnis.

In -950 two parallel projects were established to define the expected lifetime of Tarnis.

In -925 the Abh project finished construction of its star probe. In -924 the second star probe, with improved shielding, was launched into Tarnis. The probe reached its operating depth of 300,000 km, and the meson communicator indicated an increasing instability in the sun, centered on the probe itself. Tarnis took a slight wobble and began throwing huge stellar flares.

These flares generated a huge electromagnetic pulse that blew all electronic components on Darrian. About three weeks later the physical wave front of expanding gas reached Darrian. When it hit, the last of superheated gases struck like a blowtorch, temporarily raising local temperatures to 250° and higher. The Maghiz destroyed whole areas of Darrian, scalding basins, evaporating shallow seas, burning forests and grasslands, and destroying populated areas. Fortunately, the flares lasted only three days. At the end of those three days, the surviving 20 percent of Darrian's population came out and began rebuilding.

The Abh Project station in the asteroid belt was never shielded for flares of the magnitude that were generated. The station itself was destroyed; most of its personnel were killed. The survivors spent four years repairing a single shuttle that would take them back to Darrian.

The electromagnetic pulse from Tarnis continued through interstellar space at the speed of light, hitting each of the Darrian colony worlds in turn. Even with forewarning, it was an impossible job to adequately shield every piece of electronic equipment from the pulse. As it arrived in each system (which scheduled a Pulse day for equipment to be powered down), some unshielded equipment was fried and some electronic systems failed.

Some researchers have posited that the Darrian Star Trigger may have been reverse engineered from an Ancients Artifact known as a Nova Trigger. Many researchers believe that Nova Triggers were used in the apocalyptic Final War and help to explain the many planetoid belts in place around world-systems rumored to have been battlegrounds. These theories happen to correlate with Vilani folklore.

Of course, others feel that the Star Trigger was simply Darrian Superscience gone wrong.

This list of sources was used by the Traveller Wiki Editorial Team and individual contributors to compose this article. Copyrighted material is used under license from Far Future Enterprises or by permission of the author. The page history lists all of the contributions.
Retrieved from "http://wiki.travellerrpg.com/index.php?title=Star_Trigger&oldid=614556"
Categories: