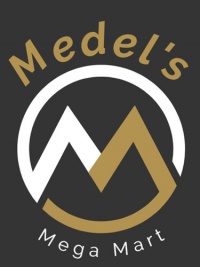 Medel's Mega Mart is an Imperial registered company that operates a chain of large discount stores across Reavers' Deep and Daibei Sectors.

The company operates its stores in most class A, B and C starports in Imperial space as well quite a few Class A Starports in non-Imperial space where the population of the world is over 100 million.

Medel's is governed by an executive council and an investor's circle.

In the early years Medel rented floor space close to Travellers' Aid Society hostels and would sell anything he thought they would buy. Over the last 150 years the company has undertaken to grow their market share, purchasing warehouses and buildings at starports for their existing stores as well as potential new sites. The company is expecting to mark the celebrations of its 300th year of operation with the opening of its 300th warehouse store at the starport on Caithness/Scotian Deep (Reaver's Deep 1217).

This list of sources was used by the Traveller Wiki Editorial Team and individual contributors to compose this article. Copyrighted material is used under license from Far Future Enterprises or by permission of the author. The page history lists all of the contributions.
Retrieved from "http://wiki.travellerrpg.com/index.php?title=Medel%27s_Mega_Mart&oldid=566041"
Categories: