The Lowalaa or Iggle is alternately a large bird or a very large flying carnivore.

The Lowalaa (Lowalaa Columbaformis Curatis) is native to Ituxi (Delphi 0722). The Lowalaa are common pets, especially among the nobility, in the regions of the Imperium stretching from Delphi to the thumb of the Great Rift.

A remarkable ability of the Lowalaa, most notable in the subspecies Thrumet Lowalaa, is vocal mimicry. Lowalaas do not have the same vocal fidelity as some Terran birds, but they can learn short tunes. This talent extends to learning somatic patterns - in effect, dancing. Using bird puppets as training aids, entertainment troops have devised some very impressive acts with Lowalaas.

Their intelligence and trainability are chiefly credited for the Lowalaa's popularity, both as pets and working birds. On low tech worlds, they are often used as very dependable messengers and spotters.

The Lowalaa is highly adaptable. It can adjust to environmental extremes very well, but not to solitude. Its health will soon fail if a Lowalaa is frequently left alone. For this reason, they are often kept in mated pairs.

Lowalaas mate for life and readily breed in captivity. Females will lay a clutch of two to five eggs every two to twelve months in the wild, varying with the world. Breeders, however, can hasten the mating cycle or halt it indefinitely. Lowalaas are very flexible in the construction of nests, even having been known to use electrical wire and mylar tape to good effect. Once the eggs are laid, both the male and female become very defensive of their nest, with other Lowalaas joining in. It is rare for even the owner to be permitted to touch the eggs.

The life expectancy of a Lowalaa is 12 to 15 years.

The most remarkable characteristic of the Lowalaa is its colorful plumage, for which the Lasias Lowalaa is particularly noted. Each bird displays different colors and patterns; a record of the food sources it was exposed to. In the wild, birds with certain markings will be looked to as guides to certain nutritional needs of the flock.

In captivity, their diet is managed with extreme care to create the desired effects. Special additives have even made such things as silver or luminous birds.

A bird traditionally symbolizing trust, caring, and loyalty. The Lowalaa has earned this reputation for its many positive characteristics.

The bird was adopted as the family symbol of Prince Asan, brother of Emperor Paulo III. After Paulo had ascended the throne in 1031, Asan was awarded a duchy in Delphi Sector. Asan moved to Delphi and later married Marian, the daughter of Delphi 's senior duke. This established his family line as the senior one in the sector.

It was transported to Anaxias (Delphi 1724) during the First Imperium to control the local equivalent of insects. Its ability to adapt to the new environment was underestimated, however, and the population rapidly exceeded that of its homeworld. It is now the most common aviform on Anaxias , where it is popularly known as the Flying Grace.

The Iggle (...in symbolic form) appears on the regional crest associated with Delphi Sector, part of the Domain of Sylea.

The Travellers' Aid Society classifies the iggle as dangerous to most sophonts and advises caution regarding this creature. 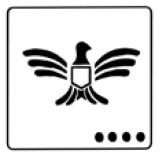 This creature can primarily be found in the following areas:
Charted Space:

No world articles for Lowalaa

This list of sources was used by the Traveller Wiki Editorial Team and individual contributors to compose this article. Copyrighted material is used under license from Far Future Enterprises or by permission of the author. The page history lists all of the contributions.
Retrieved from "http://wiki.travellerrpg.com/index.php?title=Lowalaa&oldid=484792"
Categories: