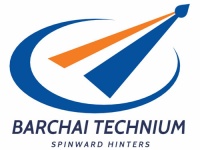 The Barchai Technium is an interface line.

Spearheaded by its proprietary Leviathan class Freighters, the company has ventured far into the Spinward Hinters, helping to develop the J-2 route that became the Gold Road.

Barchai Technium was founded before the Fifth Frontier War to develop trade with remote and unexplored worlds in the Trojan Reach, Foreven and Beyond Sectors. BT started out with a handful of ships and a lot of ambition. Its crews included IISS veterans, and their experience in contact allowed BT to make steady inroads into the closed markets of the Reach and Beyond.

But its trade became a casualty of the Civil War. Aslan ihatei overran most of its Trojan Reach trading area, and disrupted its operations in Beyond Sector as well. The pullout of Makhidkarun in 1119 allowed it to absorb the Vilani corp's remaining personnel, purchase most of its BTC assets, and gain its client base. And with the demise of Tukera Lines, BT acquired a sizeable fleet of ships and a number of modern maintenance facilities in the Marches. The company renamed itself Leviathan Lines in 1135, after its famous freighters, and has turned itself into one of the Regency's premiere shipping companies. Most of its focus remains interface service between the Regency and the Spinward Hinters.

No world articles for Barchai Technium

This list of sources was used by the Traveller Wiki Editorial Team and individual contributors to compose this article. Copyrighted material is used under license from Far Future Enterprises or by permission of the author. The page history lists all of the contributions.
Retrieved from "http://wiki.travellerrpg.com/index.php?title=Barchai_Technium&oldid=563627"
Categories: