Veil of The Rim

The Veil of The Rim is a cloud of interstellar dust and gas found within the Great Void.

The Veil of The Rim is a very large giant molecular cloud. It has maximum dimensions of 200 parsces coreward-rimward, 400 parsecs spinward-trailing, and covers all or part of 55 sectors, nearly 1% of the estimated area of the Great Void. The density and size of the cloud permits the formation of molecules such as molecular hydrogen (H2), carbon monoxide (CO) and ammonia (NH4). The Cloud's mean density is around 100,000 particles per cm³. It has an interior structure consisting of a complex pattern of filaments, sheets, bubbles, and irregular clumps. 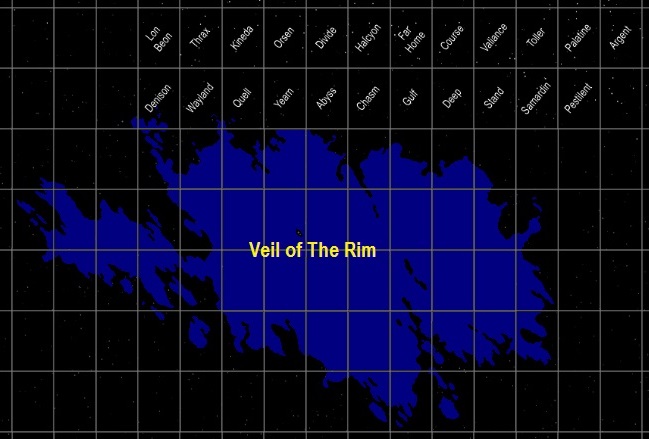 Veil of The Rim.

The Veil of The Rim is incredibly diffuse – other than a few of its denser regions it is not visible to the naked eye, and is barely discernable to anything other than sophisticated and sensitive astronomical devices. Despite its immense size, a traveller passing through the Veil would barely notice its presence.

TravellerMap:
[1] ... [2]
The extreme coreward tip of the Veil of The Rim lies just within the Empty Stars.

The Veil of The Rim is moving in a generally spinward-rimward direction relative to the Orion Arm, with the retreating coreward edge of the cloud occupying the very rimward parts of Denison, Wayland and Quell Sectors. In a few millions of years the last traces of the cloud, other than a few fragments that have condensed into nebulae around stars, will have moved away from the area.

The feature was officially detected by the University of Selasia Spinward Survey. The true dimensions of the Veil became public knowledge following publication of the "Stars of the Rim" Astrographic Survey in 5570AD, although many of its internal features have been known of for millennia.

This astrographic feature is primarily found in the following areas:
Uncharted Space:

The following systems and worlds are associated with this astrographic feature:

No world articles for Veil of The Rim

This list of sources was used by the Traveller Wiki Editorial Team and individual contributors to compose this article. Copyrighted material is used under license from Far Future Enterprises or by permission of the author. The page history lists all of the contributions.
Retrieved from "http://wiki.travellerrpg.com/index.php?title=Veil_of_The_Rim&oldid=600233"
Categories: