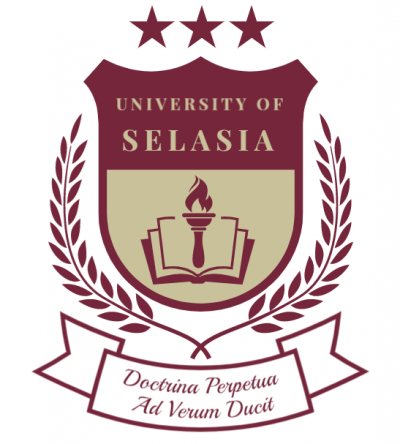 The University of Selasia is a premier center of learning within the Distant Fringe, founded by Willem Bright and rivalled only by the University of Tal Varisa. It is closely associated with the Alasim-Bright Memorial Hospital.

(Forever Learning, Leading to the Truth)

Welcome to the University:
The University was founded in 4933AD by a grant of property and land from Willem Bright to mark his 70th birthday. The majority of this grant, which amounted to millions of square kilometers of prime real estate on Selasia and the other worlds of the Alasim Cluster, was sold to create a financial reserve and to fund construction work on the first University buildings. Certain key sites on Selasia were retained and today form the University grounds, housing the various Schools, Halls, and Administrative Centers.

The main Schools of the University of Selasia are located on Selasia. The University also maintains campuses on each member world of the Bright Conclave and on a number of other worlds located within the Bright Peninsula, most notably Resulos in Divide Sector.

The Bright Monument, atop Mount Bright. Properly, it is the Spirit of Exploration. 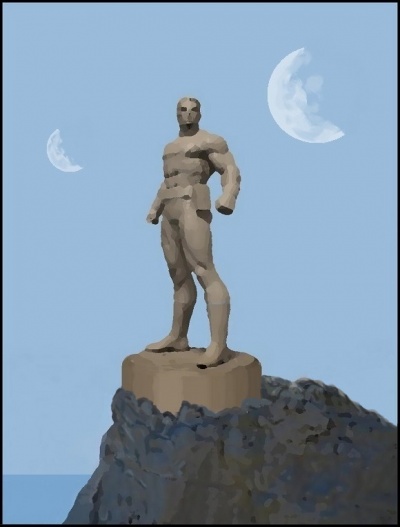 The University of Selasia is diverse and cosmopolitan, with members drawn from a wide range of social, ethnic and racial backgrounds.

The estimated total population of the University is approximately 75,000. This includes undergraduate and graduate students, teaching staff and members of the faculties, administrative staff, variously retained individuals, and individuals engaged in research, expeditions, industrial associations or military ventures. The vast majority of these students are humans, largely originating from within Halcyon Sector. There are notable communities of Esaran, Temelik and Hoppers within the University, and smaller groups of Meroquan and far-flung Edur.

Students attend lectures and classes under the tutelage of academic staff and complete projects, assignments and research to fulfill the criteria of their academic commitment in order to earn their degree. This may take place entirely within the precincts of the University or it may involve working 'in the field', often with an outside group such as a business or an industrial concern, as part of a charity or a project, with governmental authorities and agencies, with the military, or more rarely by taking part in an expedition.

Throughout the course of their studies and academic activities, students are expected to produce a body of work and to be able to express a degree of understanding of their chosen subject. Their progress is continually monitored, assessed and evaluated by their tutors. Guidance and advice is provided when required.

When students complete their studies they receive an academic degree and become Graduates of the University. Graduation Day includes a procession of the academic staff and candidates, the granting of academic titles to the graduate, and a valediction. It is traditional to wear academic dress at formal ceremonies. Post-graduation celebrations usually involve class pictures and throwing caps into the air, a formal banquet with toasts and speeches that acknowledge particular achievements, and a great deal of intoxicated partying.

Alumni of the University share a particular fondness for their "alma mater". There are class reunions, an annual event during which alumni from all over the Distant Fringe return to their Hall and their School to reconnect with old friends, meet new ones and sample intellectual fare. The alumni are grateful to the University, and generally wish to give back to the institution so that more people will benefit from it: a large majority provide direct financial support, with very substantial gifts made during the Reunions.

The Central Administration of the University of Selasia consists of a number of different organisations with overlapping roles and responsibilities.

The office of Chancellor of the University, for which there are no term limits, is mainly ceremonial. The role is generally filled by a popular public figure with some academic credentials – entertainers, politicians, authors and artists have served as Chancellor in the past. The Office of the Chancellor is supported by a small administrative staff.

The Senate is the university's governing body and consists of all holders of higher degrees: the university's internal governance is carried out almost entirely by its own members, with no direct external representation. It is a direct democracy comprising all resident senior members of the University. It elects the Chancellor, the High Stewards, and the membership of the Council. Under special circumstances it can issue a Senatorial Decree, an order to enact a specific process or carry out a particular course of action.

Halls are centered, as their name suggests, on "Great Halls". When the University was founded in the 50th century these were large communal areas where all of those resident in the Hall could gather at one time. The population of the University has grown considerably since that time (the average residency for a hall is around 4500 individuals) and the Great Hall now serves as a Room of State, where dignitaries may be hosted at banquets, celebrations or events may be staged, or ceremonies may be performed.

Halls actually consist of many individual buildings and complexes spread over a large area. They primarily contain dormitories and chambers – accommodations for their resident students and staff – but they include common rooms, libraries, study areas, media centers, and other facilities conducive to education and study. Halls have permanent staff to see to the needs of their incumbents and residents, including security offices manned by Constables.

Many Halls have memorials to alumni who lost their lives serving in the Volunteer Battallions that fought in the Scybrian Wars.

The University of Selasia has 17 Halls, founded between the 50th and 56th centuries. No Halls were founded between 5244AD and 5390AD (the period of the Scybrian Wars), which allows them to be distinguished into two groups according to their foundation date:

Five of the nine 'Old' Halls and all eight of the 'New' ones admit students regardless of gender, species, or academic status, and without any age restrictions. One Hall admits only members of the female gender, one admits only members of the male gender, one offers preferential placements to non-human Sophonts, and one admits only postgraduates. These Halls also place restrictions on the admission of staff members, typically allowing only the appropriate gender or species to become fellows.

The University of Selasia consists of six Schools made up of more than 100 Faculties, Departments, Schools, Colleges, Institutes, Centers, Groups, Units, and Laboratories. They are collectively overseen and maintained by the Central Administration.

A School within the University is a broad administrative grouping of related Faculties and other units.

The College of Clinical Medicine is closely associated with the Alasim-Bright Memorial Hospital, the largest and most advanced medical facility within the Distant Fringe. It is primarily a teaching hospital and has more than 10,000 beds and 13,000 members of staff, though only a percentage of these are members of the University.

The University of Selasia includes a number of non-school Institutions.

The Tirell Libraries are a collection of approximately 50 libraries and museums (and their archived comparative collections) that serve the University of Selasia, including, most famously, the Tirell Library itself, as well as many other (but not all) central and faculty libraries. Together, the libraries hold 55 million printed items, as well as numerous other objects and artefacts. Transcripts, images and holographic reproductions of the majority of the Library's holdings are available upon request.

Selasia University Press is the publishing business of the University of Selasia. Its purpose is to further the University's objective of advancing knowledge, education, learning, and research. Its extensive peer-reviewed publishing lists comprise more than 100,000 titles covering academic research, professional development, over 1000 research journals, and a large raft of academic and educational titles. It distributes its products to nearly every world in the Distant Fringe.

The Department of Engineering/IOT and the Department of Archaeology and Sophontology/SOBS jointly fund the Orowani Deep Space Fuel Cache, a Calibration Point located in interstellar hex 1937 of Halcyon Sector. The ODSFC provides access to the Sarunt system, the Homeworld of the Treehangers, where various Faculties and Departments conduct studies and research. Engineering students, in particular, gain practical experience working on the station.

There is an active Student Union within the University. It is involved in all aspects of University life and organises and promotes a wide range of social events.

The University maintains extensive NOTC and ROTC programs. These are run in conjunction with the Navy and the Armed Forces and graduates automatically receive a commission as an officer in the appropriate service.

The University of Selasia is known to have a radical, active Mantlerist movement.

Traditions: No information yet available.

Public concerts are held across the worlds of the Bright Conclave every year by the Institute of Music to mark the anniversary of the founding of the University. These events are an opportunity for students to showcase their talents and have generated a huge supporting industry, including recording contracts, ticket sales, and lines of specialized clothing such as garments bearing logos or images of performers.

Bright Day is a holiday period celebrated within the University of Selasia.

On an unspecified day, the jolly-faced portly hologram of Willem Bright, clad in his long crimson robes, walks into classrooms across campuses, accompanied by his guards, and dismisses class for the entire university. Students are then treated by the administration to a day of fun and entertainments and feasting.

It has become tradition for a group of students to climb to the Bright Memorial, atop Mount Bright and visible across the main campus, on Bright Day. They decorate the monument, adorning it with a gigantic hat and scarf. In the past students have used air/rafts or grav belts to do the deed, but this is considered to be cheating.

This institution is primarily based out of the following sector:
Uncharted Space - Distant Fringe:

The following systems and worlds are associated with this institution:

This list of sources was used by the Traveller Wiki Editorial Team and individual contributors to compose this article. Copyrighted material is used under license from Far Future Enterprises or by permission of the author. The page history lists all of the contributions.
Retrieved from "http://wiki.travellerrpg.com/index.php?title=University_of_Selasia&oldid=594400"
Categories: