Still smarting from their defeat in the 4th War, the Terrans took advantage of a minor border incident to renew hostilities. In -2343 they launched an offensive aimed at retaking the worlds lost in the 4th War. The Terran strategy was not aimed at directly reconquering the worlds, rather isolating them and reducing them at leisure.

Historical Spectrum of the Interstellar Wars[edit] 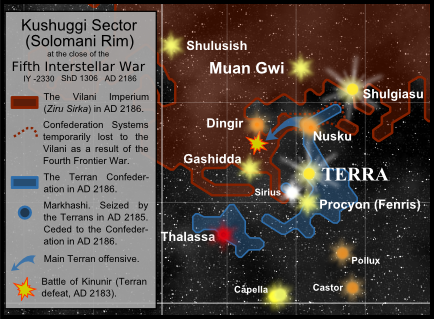 The initial Terran target was Nusku which fell after a brief siege. Then rather than turning to trailing as the Vilani expected, the Terrans drove into the Dingir Subsector taking Apishal and Zaggisi in 2176 AD, thereby establishing a strong defensive position. Only then did the Terrans focus their attentions on the coreward worlds in the Sol Subsector. Whilst holding off the Vilani in Dingir, the Terrans reduced these worlds one by one over the next 3 years.

During this period, the Vilani launched a number counter-offensives aimed at relieving their possessions in the Sol subsector, however the Terrans held off each one (albeit with some difficulty). With the Sol subsector secure, the Terrans turned again to Dingir. In 2180 AD they moved against Shuruppak and Meshan. Both these worlds fell with little struggle and the Terrans drove deeper into Dingir. However they were then starting to overreach themselves.

In 2183 AD the Terrans reached Kinunir. Their defeat at the Battle of Kinunir marked the high water mark of the Terran advance in the 5th War. Over the course of the next 3 years the Vilani gradually pushed the Terrans back. By this stage the war was proving to be a strain on both party's economies and in 2186 AD a treaty was negotiated in which the Terrans regained the worlds they had lost in the 4th War.

This event occurred at the following worlds and systems:

This list of sources was used by the Traveller Wiki Editorial Team and individual contributors to compose this article. Copyrighted material is used under license from Far Future Enterprises or by permission of the author. The page history lists all of the contributions.
Retrieved from "http://wiki.travellerrpg.com/index.php?title=Fifth_Interstellar_War&oldid=572897"
Categories:
Hidden category: