The Cŵn Annwn are a Corsair band operating out of rimward Foreven Sector. They comprise mainly Gvegh Vargr though sometimes an Aekhu Vargr is captured and converted to their ideology and added to the Packs. Members of the so-called Hounds of the Wild Hunt are patterned off Terran Welsh and Celtic mythology unearthed by two Sword Worlds Humans named Matilda and Pwyll. The two have renamed themselves after Mallt-y-Nos and Pwyll Dyfed, two characters they found in a relic, Terran tome titled the Mabinogion. Matilda, a Sacnoth Psion graduate and Pwyll included the hate-filled Ursa male they recruited to their Corsairs concept and renamed Curnunos, their Master of the Hunt. With a platform for which to hunt and kill the hated Solomani who long ago tried to terminate the GenAssist ursinoid projects to uplift Black and Brown Bears, Curnunos leads any Pack of Cŵn Annwn Vargr he brings with him to slaughter Humaniti. 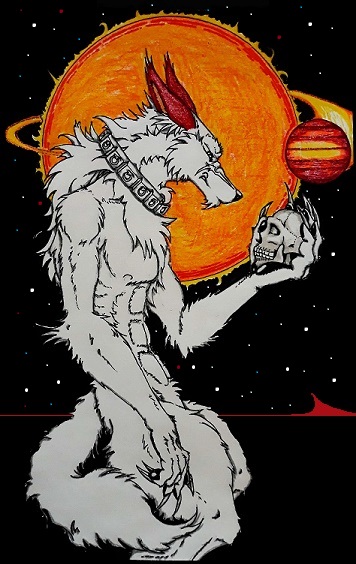 The Cŵn Annwn were first assembled in 1084 after the Fourth Frontier War and the Battle of Two Suns by Pwyll Dyfed who managed somehow to emulate Vargr Charisma with his Sword Worlder charms and promises of riches and cohesive unity under a single banner. Backed up by Matilda of the Night’s mental disciplines and other powers of the Sacnoth witches, the two began converting disenfranchised Gvegh Vargr and some Aekhu Vargr descendants displaced by the Vargr Pacification Campaigns. The Corsair band went on a rampage to slaughter piracy victims of Solomani descent. The Sword Worlds branch of Humaniti were spared savaging and consumption because Mallt-y-Nos and Pwyll Dyfed used the Icelandic Sagamaal language to convince Curnunos the Ursa Master of the Hunt that the Sworld Worlds Confederation had nothing in common with the Solomani and GenAssist, his sworn enemies.

The Cŵn Annwn capture, torture, starve, brainwash and heal Vargr to be conscripted after subjecting them to a permanent, bleaching dye that both shocks Vargr pelts white but induces a permanent form of albinism resulting in white fur. Often the darker pelts of the Aekhu Vargr require repeated dunking in this chlorine reek washtub named the Pair Dadeni (Cauldron of Rebirth). Once the Vargr wills are broken and ready to join the Packs, initiation of dying Vargr ears a blood red and lacing pelts with strontium aluminate as psychological warfare dressing giving the Pack a frightening, ghostly, glow-in-the-dark countenance. Packs of Cŵn Annwn specialize in close combat melee though armors and ranged weapons are common as can be supplied between raids. Led by Mallt-y-Nos, Pwyll Dyfed, Curnunos the Ursa or any combination thereof, the Vargr are used in planetside raiding and occasional assaults on orbital facilities. The Corsairs are known for their freakish Howls of the Wild Hunt which quieten when the Cŵn Annwn are about to attack or make a kill. The plunderers almost always capture any Vargr they encounter while slaughtering all varieties of Humaniti. Especially gruesome are the Rituals of sacrifice and savaging of Solomani unlucky to be captured by the Corsair cult. All Rituals are reserved for Humans of confirmed Solomani descent and their sacrifices are officiated by Matilda of the Night in tableau for Curnunos’ entertainment. All other Humaniti are too often killed and consumed by the famished Vargr of the Cŵn Annwn. In a strange turnabout, the cult Vargr do not kill or eat synthetic sophontiform androids or Cloned Guests though the reasons are unknown.

The cult has both a hidden Corsair Base called Arawn in a planetoid bunker nestled in an undisclosed, Foreven Sector world-system and a conversion-training den aboard a derelict starship. The Cadir Idris was renamed from a military hulk, a remnant of the Rule of Man found by the Corsair band and repurposed for training new Vargr conscripts. The brutal induction has never failed to convert a Vargr prisoner over to the Cŵn Annwn for death is sure to come for those that try to escape the cult.

The Cŵn Annwn Corsairs are found preying upon merchant lines and hapless populations in the following Subsectors:

Matilda of the Night is a female Sword Worlder, a graduate of the Psionic Institute on Sacnoth inside the Sworld Worlds Confederation. After finding a copy of the Mabinogion, she reinvented herself to take after the persona of Mallt-y-Nos from the Welsh folk lore. Presenting the concept to Pwyll Dyfed (also re-named), she encouraged him to recruit the first of the Cŵn Annwn Vargr cultist Corsairs. The psychological damage the sight of the dyed white pelts that glowed in the dark and the bloody ears of the Vargr was enough to embolden even the lowest-charisma Vargr. Her psionic powers center around telepathy and touch-healing and she uses these disciplines to get under the skin and inside the heads of Vargr conscripts. Portraying the “good cop” to the rigorous tortures, she heals conscripts until their wills are shattered and are willing to obey commands and fall in line of the cult ideology.

A dashing Sword Worlder with long, braided blonde hair, this Norse Adonis has breached the gap between Humaniti and Vargr by managing somehow to emulate Vargr Charisma and sway the loyalties of marginalized or disenfranchised Vargr, converting recruits to the cult of the Cŵn Annwn. His role in the Corsairs is angled more toward supply and support as he auctions off loot plundered after each raid to supply and equip the Packs and provide the Ursa with the latest toys for his entertainment. More loyal to Matilda, he is more than willing to let Curnunos take the lead on actual, planetside raids.

The Brown Bear Ursa has undergone the same dye-washing as the Vargr who serve him. The now-White Bear is titled the Master of the Hunt and takes his role with pleasure. He is not above beating his Pack of Vargr just to re-establish his rank in the Cŵn Annwn. A former Marine turned to a life of brutal crime, this berserk hates all Solomani and their English language. By his extension of rage, Curnunos hates Solomani descendants and the Anglic language which is close enough for the Bear to pick out English derivatives and despise. Speaking English or Anglic within earshot of the Master of the Hunt can cause him to enter a violent frenzy to maul the speaker. Often he is attended by the Cŵn Annwn at such affronts. He speaks his racial tongue of Ursan and knows enough Icelandic Sagamaal to converse with Matilda and Pwyll. So sharp is his racial hatred that he has banned any aloud speech from his Vargr underlings in the cult unless he addresses them directly, demanding a verbal answer, (which is rare).

Cŵn Annwn are known to work in smaller Packs without leadership from Mallt-y-Nos, Pwyll Dyfed or Curnunos, but such sorties are rare and are never spoken of for above reasons and fear of punishment. Full members are given what Matilda terms the “Cŵn Annwn torc”, metal collars with engraved images of the ouroboros or World Serpent from Norse mythology upon them. These collars are chemically welded on and are difficult to cut off without killing the Vargr wearer. A torc signifies distinction and charisma within the Cŵn Annwn and is only awarded after a kill has been made. Strontium aluminate is replenished on a Pack member weekly to maintain their ephemeral and haunting glow. That each Vargr converted to the cult is traumatized physically, emotionally, causally and mentally is an understatement. As of 1107, no member of the Cŵn Annwn has shed the after effects of conversion into the Corsair cult.

One survivor of the Cŵn Annwn cult is a wealthy, StarMerc Patron, a Third Imperium Marine named Private Aerrzh who escaped the torments and raids of the Wild Hunt. Hating the cult, Aerrzh, a Gvegh Vargr has used pilfered caches of plunder of the Cŵn Annwn to grow sizeable, anonymous accounts to hire mercenaries to seek out and hunt down his former Pack. He despises himself and what was done to him. Hiring StarMercs, he hopes to track down and take grisly trophies of Mallt-y-Nos, Pwyll Dyfed and the Ursa Curnunos. That he is unstable as an ex-Cŵn Annwn is a given. He cannot bring himself to speak aloud and often defaults to text messaging on a hand computer or the use of Marines Battle Sign Language to converse. His ire rises to near violence at hearing speech, Anglic angering him the quickest of languages. He knows he is diagnosed with a host of mental illnesses and tries to adapt via conspicuous consumption of raw meats though he has not taken up substance abuse or accepted prescribed medicines. Aerrzh often works with StarMercs through intermediate fixer firms, trusting them to brief mercenaries for missions he funds. His mercenaries are repeatedly warned not to speak within earshot of “Mr. Aerrzh”.