From Traveller Wiki - Science-Fiction Adventure in the Far future
(Redirected from Traveller:The New Era)
Jump to navigation Jump to search 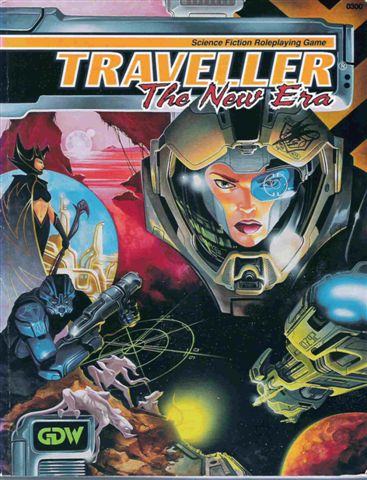 The game mechanics were changed to Game Designers' Workshop's standardized rules system which had originally appeared in the second edition of Twilight: 2000. It introduced the Virus and described the former area of the Third Imperium after interstellar society had completely collapsed. The game is often referred to as "TNE".

The primary campaign setting was in the Reformation Coalition, though secondary settings included the Regency (former Domain of Deneb) and pocket empires were beginning to see support before GDW closed its doors. The game typically revolved around re-contact of the former Imperial planets after the effects of many years of no interstellar trade. Most worlds were massive graveyards with most valuables already taken by looters, and those worlds which survived tended to be low tech and very technophobic and xenophobic. TEDs - technologically elevated dictators - were a common adversary, consisting of a ruling elite which had access to a small cache of high tech weaponry with which they exercised control over a low tech population, but there were many variations on the theme, and many other possibilities existed; the Referee had a great deal of choice available for his game.

Traveller: The New Era was replaced in 1996, by Marc Miller's Traveller.

In 1994, Traveller: The New Era won the Origins Award for Best Roleplaying Rules of 1993

84 publications for Traveller The New Era

This list of sources was used by the Traveller Wiki Editorial Team and individual contributors to compose this article. Copyrighted material is used under license from Far Future Enterprises or by permission of the author. The page history lists all of the contributions.
Retrieved from "http://wiki.travellerrpg.com/index.php?title=Traveller_The_New_Era&oldid=659827"
Categories: