A personal vacuum or space suit and is designed to protect the individual from vacuum, tainted or noxious atmospheres, and some radiation situations. [1]

It carries its own communicators, oxygen tanks for six hours, and other basic survival appurtenances. Use of a Vacc suit requires training. It acts as cloth armor when subject to attacks. Vacc suits are relatively bulky, and weigh 10 kilograms or more; the weight counts against personal weight allowances. This weight is reduced 2 kilograms per tech level as the suit gains increasing sophistication. For example, a TL–10 Vacc Suit weighs 6 kilograms, and a vacc suit at tech levels of thirteen or more adds no apparent weight over regular clothing. [2]

A Vacc suit consists of a suit type, a helmet, and a Portable Life Support System backpack (PLSS). The standard vacc suit is a mass produced, fully outfitted soft suit designed for those who have little knowledge of space or who don't need a more elaborate system. Because of this, it is equipped with a 30 km space-band radio rather than the more expensive 500 km model. The suit itself is constructed similarly to the light duty soft suit, except that it has constant volume joints to allow its wearer more freedom of movement. The helmet is a lighter version of the early type and the Type B PLSS pack is standard. Mass and price include two oxygen tanks.

Vacc Suits are designed for space or for similar environments. They are not specifically designed to be resistant to chemical attack and thus degrade in atmospheres that are corrosive. They are not designed to operate in electrically conductive environments (e.g. water) and thus can be subject to failures where such conductivity occurs (heavy or persistent rain, underwater, etc.).

Vacc Suits are designed to contain a breathable atmosphere in a vacuum or low pressure. Where there is an external atmosphere at high pressure, or where the atmosphere contains free hydrogen or other insidious agents, the usefulness of the Vacc Suit may be reduced, immediately or over time.

In these other environments other specialist suits may be more appropriate.

All suits are capable of being operated using oxygen umbilicals connected to a spacecraft's or station's oxygen supply. The user may do this to supplement his PLSS pack or operate the suit off the umbilical alone.

Suiting up normally takes about 12 minutes, but this can be cut to three if sanitary connections and safety checks are not made. Total time spent is about 8 minutes under normal conditions or about 2 minutes under emergency conditions. The suit may be removed in about 4 minutes normally or 1 minute in an emergency.

The basic Vargr Vacc Suits are known as Olok in Gvegh.

An Aslan Corsair in a TL-10 Armored Vacc Suit armed with a TL-10 Accelerator Rifle conducting EVA to board enemy vessel. This Aslan is from Clan Htyowao during the Drinax Campaign. 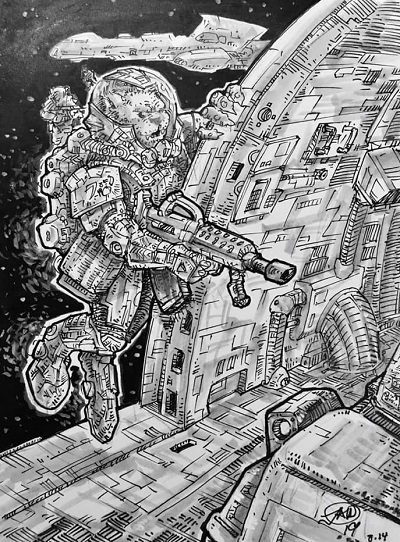 Vacc suit technology begins for most races with underwater diving suits of various types from the earliest bathysphere to later, far more sophisticated rebreather suits. Most sophonts achieve interplanetary space travel by the TL:7-9 epoch and the first space suits are designed to support life in a vacuum.

This list of sources was used by the Traveller Wiki Editorial Team and individual contributors to compose this article. Copyrighted material is used under license from Far Future Enterprises or by permission of the author. The page history lists all of the contributions.
Retrieved from "http://wiki.travellerrpg.com/index.php?title=Vacc_Suit&oldid=671692"
Categories: