Paques is a nonindustrial world, that requires extensive imports of outside technology to maintain a modern, star-faring society.

Non-canon: Paques is an ellipsoidal world, with a spherical atmosphere.

The map (at right) shows the various bands in an irregular projection. 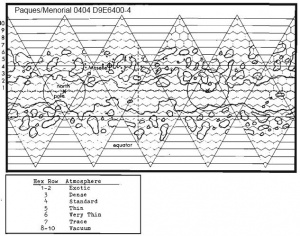 Paques (alternate spelling: Pacques) is a non-aligned world located in the Menorial Subsector of the Trojan Reach.

Non-canon: Like most of the worlds in the Rimward Void, Paques was only re-discovered recently by the IISS.

Paques was colonized in the late 900's by the crew of the Prince Moselle, a Regal Class Battle Cruiser which misjumped and crashed.

This list of sources was used by the Traveller Wiki Editorial Team and individual contributors to compose this article. Copyrighted material is used under license from Far Future Enterprises or by permission of the author. The page history lists all of the contributions.
Retrieved from "http://wiki.travellerrpg.com/index.php?title=Paques_(world)&oldid=635046"
Categories:
Hidden category: