Coyns are one of the rare artifacts more commonly recovered from Ancient sites.

Their specific purpose is unknown. 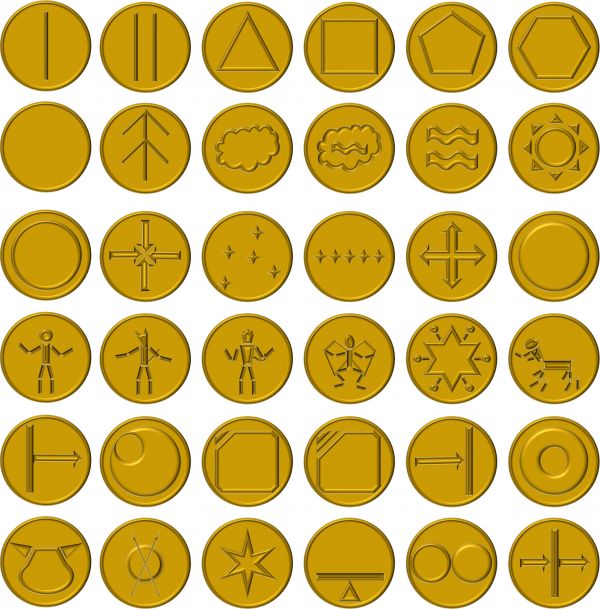 Original coyns have been found in various precious metals such as gold, silver, platinum, iridium, monadium, and even uranium. Sets range in size from six to thirty-eight pieces and are considered desirable to museums throughout the Imperium. Each coyn has a scrap value of Cr400 (if gold); to a museum, the value is closer to Cr4000.

Copies of sets of coyns are often made of aluminum, lead, or zinc, and are more frequently encountered from unscrupulous merchants or traders. Such fake coyns have a value of about Cr20 each.

In addition to the Ancients-derived coyn sets, sets are associated with Droyne communities (called koynisin), and have been so for at least 75,000 years. These more modern coyn sets are used in numerous Droyne ceremonies.

This list of sources was used by the Traveller Wiki Editorial Team and individual contributors to compose this article. Copyrighted material is used under license from Far Future Enterprises or by permission of the author. The page history lists all of the contributions.
Retrieved from "http://wiki.travellerrpg.com/index.php?title=Coyn&oldid=678719"
Categories: