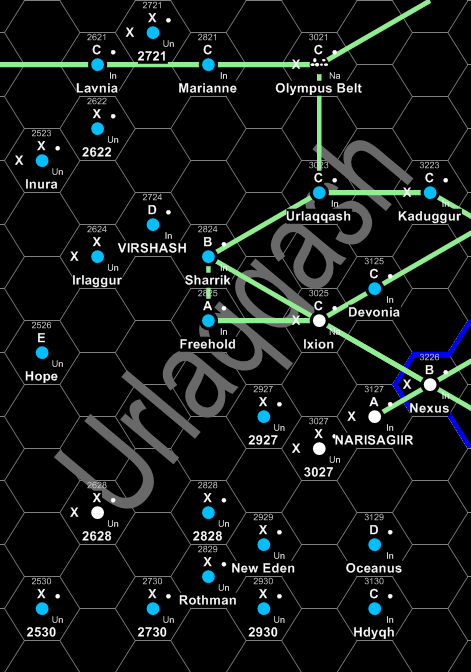 Urlaqqash Subsector is often considered the "Gateway to the Deep", as the majority of all shipping from Human space into Reavers' Deep Sector enters through this subsector. This is due in large part to astrography and the gaps between stars; as far to coreward as Woomera (Db 0114) and Grumith (Db 0210) there are gaps that require Jump-3 or better to cross, and then along the whole coreward edge of Reavers' Deep Sector there lies the "Thumb" of the Great Rift (see regional Border Map).

Reavers: Unfortunately, this same astrography means that Urlaqqash Subsector is often the route of less-friendly traffic going the other direction, as Reaver bands raiding into Daibei Sector also pass through here. It is not uncommon for travellers in this subsector to find their ship's sensors picking up other vessels running without transponders; the best practice is to avoid these, as raiding parties are usually not averse to a bit of space piracy along the way.

Population: Urlaqqash Subsector is home to the non-Human sentient species Virushi (at Virshash (RD 2724)) and the variant Human species Urlekki (at Urlaqqash (RD 3023), which gives the subsector its name), but the largest concentration of population is actually at Narisagiir (RD 3127), where government population-expansion policies have resulted in a population of over 5 Billion.

This list of sources was used by the Traveller Wiki Editorial Team and individual contributors to compose this article. Copyrighted material is used under license from Far Future Enterprises or by permission of the author. The page history lists all of the contributions.
Retrieved from "http://wiki.travellerrpg.com/index.php?title=Campaign:SBRD/Library/Urlaqqash_Subsector&oldid=46511"
Category: