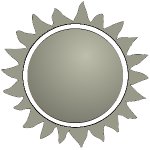 Andrew Boulton was a Traveller author, contributor, and fan. This talented and accomplished gentlesophont can be found on the Wall of Heroes.

Andrew Boulton was a devoted Traveller fan who made substantial efforts to support the game and share it with others. He served admirably as an admin on these boards, never becoming intrusive, but always concerned and facilitating.

Andrew also took great pride (and justly so) in his contributions to Traveller. He was extremely pleased that his Beowulf in Distress was selected for the cover of the Traveller5 Beta CDROM, although the selection was based on his talent and execution rather than any special connections.

Andrew produced the Traveller Calendar annually since 2007, showcasing a variety of interesting and excellent art for Traveller, and devoting the proceeds to several worthy charities.

Andrew was a widower with a continuing devotion to Penny. He wrote touchingly of his meeting her and falling in love and having that love returned. They were married in 2003 (he called it the happiest day of his life). Alas, they had less than a year together before she died on New Years Day 2004.

Andrew was a participant in the Traveller5 Beta and shared his constructive criticism with logic and passion, and his contributions have made the game better for it. We (and specifically I) will miss Andrew terribly, but I am grateful to have known him and have had his support.

This person was been involved with Traveller in the following ways:

This person did not participate at the wiki. However, he granted permission to host his materials.

This person has authored, contributed, playtested, or otherwise participated in the publication of the following products: