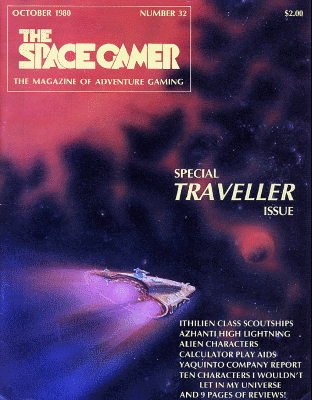 The Space Gamer supported a number of other games and authors, but it included nearly the whole gamut of early Classic Traveller authors and artists as well.

The Space Gamer was a magazine dedicated to the subject of science fiction and fantasy board games and role-playing games. It quickly grew in importance and was an important and influential magazine in its subject matter from the late 70s through the mid-80s. The magazine is no longer published, but the Better Games maintain a web presence using its final title Space Gamer/Fantasy Gamer.

The Space Gamer started out as a quarterly publication of the brand new Metagaming Concepts company in 1975. Initial issues were in a plain-paper digest format. By issue 17, it had grown to a full size bimonthly magazine, printed on slick paper.

When Steve Jackson departed Metagaming to found his own company, he also secured the right to publish The Space Gamer from number 27 on. The magazine stayed with Steve Jackson Games for the next five years, during which, it was at its most popular and influential. In 1983, the magazine was split into two separate bimonthly magazines: Space Gamer (losing the 'The' with the split in Number 64), and Fantasy Gamer; the former concentrating entirely on science fiction, and the latter on fantasy. This arrangement lasted about a year. Fantasy Gamer ran six issues before being folded back into Space Gamer. Steve Jackson Games published through issue 76 (Sept/Oct 1985).

In 1986, the magazine was sold to Diverse Talents, Incorporated (DTI) who continued the magazine with the same numbering and format (after a gap of nearly a year and a half), but with the name Space Gamer/Fantasy Gamer. The trademarks to Space Gamer and Fantasy Gamer was then sold to World Wide War (3W), a company which for a brief time tried to ascend to the top of the adventure gaming hill. They also purchased Strategy and Tactics. Alas, WWW also went down like Metagaming, and Space Gamer ended up in the hands of Future Combat Simulations (FCS). After publishing just one issue, FCS could not continue and a year later FCS declared bankruptcy. After passing through several hands, the Space Gamer/Fantasy Gamer trademark got passed to Better Games.

This list of sources was used by the Traveller Wiki Editorial Team and individual contributors to compose this article. Copyrighted material is used under license from Far Future Enterprises or by permission of the author. The page history lists all of the contributions.
Retrieved from "http://wiki.travellerrpg.com/index.php?title=The_Space_Gamer&oldid=606535"
Categories: