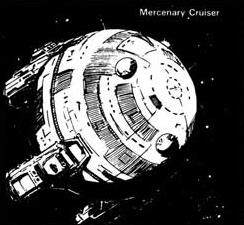 The Mameluke is an 800 ton Broadsword class Mercenary Cruiser.

Mameluke is frequently found within Trouble in the Spinward Marches (CT) Play By Email Campaign.

In the particular setting of the campaign, Mameluke is an aging member of the Imperial Navy which has been relegated to training reserve naval officers and ratings. She has several active duty naval officers assigned as regular crew who provide leadership and training to the largely inexperienced trainees who are the focus of the Mameluke's mission.

This list of sources was used by the Traveller Wiki Editorial Team and individual contributors to compose this article. Copyrighted material is used under license from Far Future Enterprises or by permission of the author. The page history lists all of the contributions.
Retrieved from "http://wiki.travellerrpg.com/index.php?title=Mameluke&oldid=597608"
Categories: