House Aledon is in tremendous favor of the standing Emperor and has distinguished itself mightily.

House Aledon is a force of note within the Marches and their network of contacts and power base are well established.

Albert Shumma Aledon, the 12th duke, married Tara Ling from the Dagudashaag branch of the Lings. Her parents disapproved strongly of the match and made some extremely wounding remarks about backwoods peers and her intelligence. Tara furiously renounced her family and never spoke to them again. Their son Willem Caranda and daughter Rachel Estelle (named respectively after the famous first duke and his grandmother, the first baroness) consequently used their second personal names instead of their mother's family name.

The Aledons of Clearwater are descended from Marcia, the younger sister of Nobert, the 11th Duke. The branch currently (1116) consists of three siblings, great-grandchildren of Marcia, the 71 years old twins Rachel and Thomas and their two year younger brother Roland, plus Thomas' daughter Georgina, who has a daughter Samantha Samson Aledon. The branch seems likely to become extinct when Georgina's only offspring, Samantha who shows no interest in procreating as of 1103 dies. 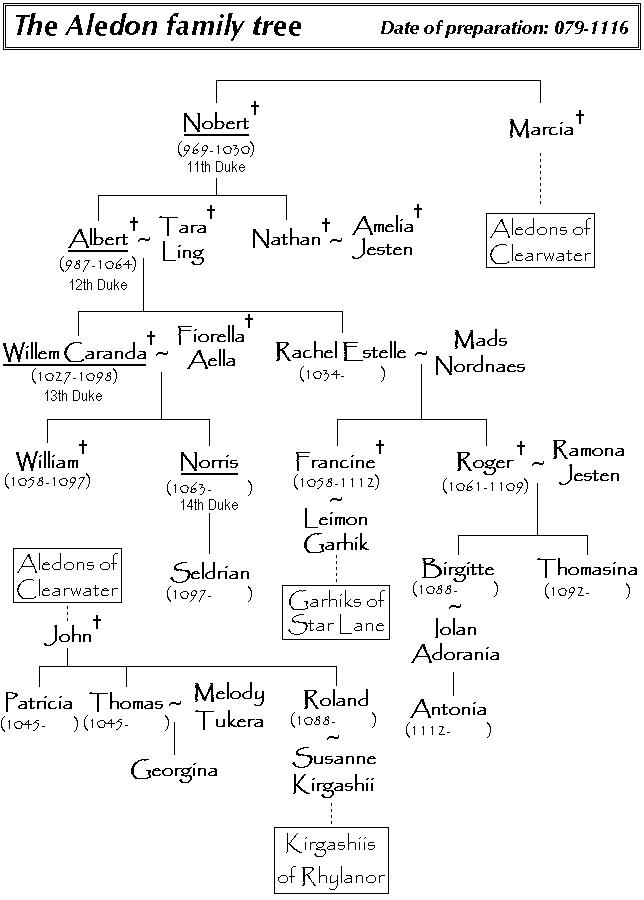 By the standards of the Third Imperium, most of the noble families of the Spinward Marches are young ones and House Aledon is no exception.

This list of sources was used by the Traveller Wiki Editorial Team and individual contributors to compose this article. Copyrighted material is used under license from Far Future Enterprises or by permission of the author. The page history lists all of the contributions.
Retrieved from "http://wiki.travellerrpg.com/index.php?title=House_Aledon&oldid=459643"
Categories: