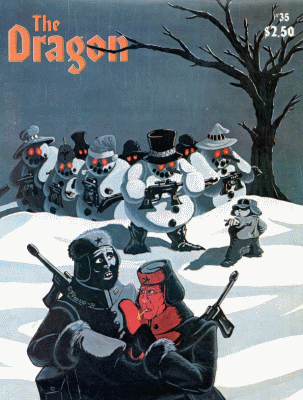 Dragon Magazine was originally designed to support the roleplaying industry in general and grew into a house organ for TSR.

Dragon Magazine featured a number of articles in the early years of Traveller, even publishing them while TSR sci-fi RPG game titles coexisted alongside Trav. The industry later changed.

Dragon magazine was born in 1976, as an outgrowth of the popularity of Dungeons and Dragons.

This list of sources was used by the Traveller Wiki Editorial Team and individual contributors to compose this article. Copyrighted material is used under license from Far Future Enterprises or by permission of the author. The page history lists all of the contributions.
Retrieved from "http://wiki.travellerrpg.com/index.php?title=Dragon_Magazine&oldid=676881"
Categories: