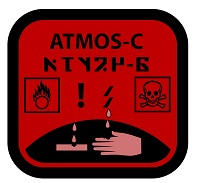 A Insidious Atmosphere is similar to a corrosive atmosphere, but extreme conditions cause the corrosive effects to defeat any protective measures in two to twelve hours.

The term insidious atmosphere is quite sufficient for the layman, but it is far more descriptive if a starship crew person reports that a the ship is about to debark to a world with a hydrogen atmosphere where subtle hydrogen seepage could cause a dangerously explosive air mix inside a crew person's vacc suit, which could be ignited by a spark from the suit's electrical system. [1]

An Insidious atmosphere is so dangerous that it will defeat a vacc suit after just a few hours and kill the sophont inside it. Venus, with its incredible high pressure, high temperature atmosphere comes into this latter category. [2]

Extreme Atmospheres: Some of the more difficult atmosphere types to explain and describe are the 'extremes', types A, B and C which equate to Exotic, Corrosive and Insidious.

Gasses which give an atmosphere an extreme label include carbon dioxide, methane, nitrogen, sulphur, oxygen, hydrogen, ammonia, chlorine and fluorine. These gases are often found in combination with others on the list potentially mixing together with additional dangerous effects into one nasty airborne cocktail! [4]

This list of sources was used by the Traveller Wiki Editorial Team and individual contributors to compose this article. Copyrighted material is used under license from Far Future Enterprises or by permission of the author. The page history lists all of the contributions.
Retrieved from "http://wiki.travellerrpg.com/index.php?title=Insidious_Atmosphere&oldid=591850"
Categories: