Misplaced Stars: Many of the stars in the Traveller universe are not where they should be in relation to earth, or their galactic position. The movement of some of the notable stars would cause shifts to the constellations, and which star is the brightest in the sky.

While some amount of inaccuracy is expected, as the traveller universe is two-dimensional (the galaxy is a disk, but a thick one relative to the area of Charted Space). Several notable stars have been included on the charted space map, but these are not in the most accurate of positions. The first image is the map of Charted Space with the notable stars highlighted. This map is turned so that the galactic core is to the right. This map is 320 by 512 parsecs. 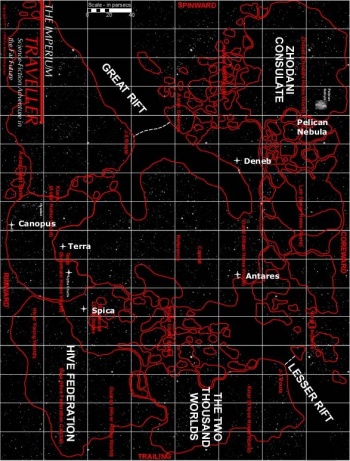 The next images are from a Public domain software Where is M13? this software shows the position of various objects in relation to the galaxy (or night sky).

The first image is at a comparable scale to the charted space map. On the left is a top view of the galaxy with core to the right, on the right is the side view (also with the core to the right). I have labeled all the stars, as the software just highlights one at a time. As can be seen Vega should be spinward of where it is, Canopus should also be much spinward of its location. Spica is somewhat coreward of its position in Traveller (note it is higher than lineraly distant), and Antares is somewhat closer (rimward). (The pelican Nebula and Deneb are at the end of the blue line (much out of picture and very much in the wrong direction, their distance to the core is approximately correct but it should be 100s of parsecs further spinward).

This second image is not to scale, and is zoomed out 7x to show the position of Deneb and the Pelican Nebula. (The dot and green box near the top of the image). The side image shows the thickness of the galactic plane. Antares (Alpha Scorpii) is circled. Not in particular that the thickness is greater than the distance from one corner of Charted space to the other. 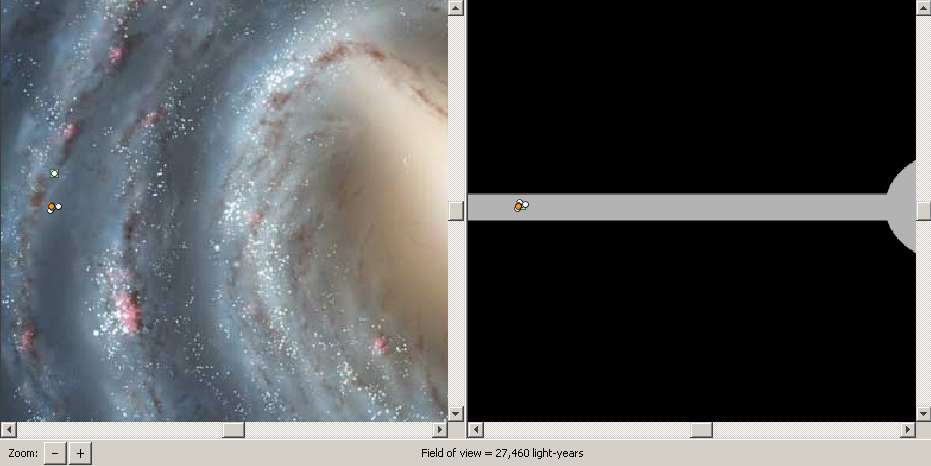 This final image shows a map of the Galaxy zoomed out another 7.5x to show the core (the bulge can be seen on the side view).

Traveller designers have gradually been taking advantage of advancements in astronomy over the years (...roughly 40 years as of 2017) and adjusting Traveller's star charts accordingly.

This list of sources was used by the Traveller Wiki Editorial Team and individual contributors to compose this article. Copyrighted material is used under license from Far Future Enterprises or by permission of the author. The page history lists all of the contributions.
Retrieved from "http://wiki.travellerrpg.com/index.php?title=Misplaced_Stars&oldid=397162"
Categories:
Hidden category: