Generic Role-Playing for Internet Players (GRiP) was an early year 2001 software package to allow groups to play RPG's over the internet.

PUBLISHER BLURB:
TRAVELLER chronicles the universe of the far future... of the golden age of the Third Imperium. This is an age of prosperity and danger: traders and soldiers roam the worlds of the interstellar Imperium in search of profit and power, and risk their lives along the way!

GRiP (Generic Role-playing for Internet Players) allows Game Masters to run their campaigns over the Internet, or personal/local networks for up to 8 players using a specialized personal game server. GRiP is tailored made, and designed for online role-playing. Built from the ground up with Game Masters and Players in mind.

GRiP: The TRAVELLER Edition combines these two fantastic systems into one product, letting you get started with Traveller and get started gaming online! Even if you don't want to game online, the GRiP: Traveller Edition is a great tool for any Traveller Game Master! You get everything you need to play, around the kitchen table OR online, plus a number of handy Traveller Tools, such as a Character Generator, Ship Designer, and our multi-function InfoScreen system. 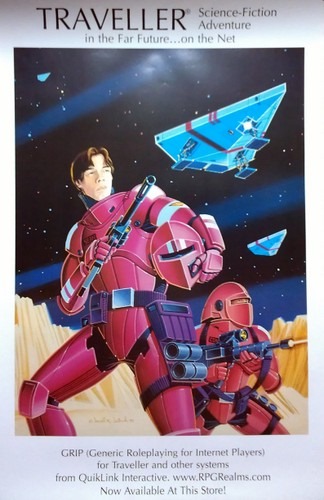 QuikLink Interactive was founded in 2001 CE by Hunter Gordon to produce and sell Generic Role-Playing for Internet Players (GRiP), a software package to allow groups to play RPGs over the internet.

This list of sources was used by the Traveller Wiki Editorial Team and individual contributors to compose this article. Copyrighted material is used under license from Far Future Enterprises or by permission of the author. The page history lists all of the contributions.
Retrieved from "http://wiki.travellerrpg.com/index.php?title=GRiP&oldid=562019"
Categories: