The actual details of CharGen have been changed and modified a number of times over the years since Traveller was first published in 1977 CE, but it has always kept the possibility of character death during the process.

Another key feature is that Traveller has consistently rejected features of character advancement common to other RPGs. Traveller has rejected experience points in most of its editions. Referees or gamemasters typically award good roleplay and clever choices in other ways. 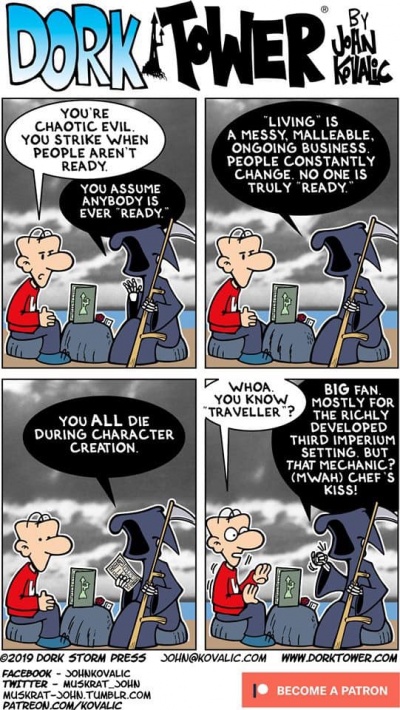 Traveller is best known for its potential lethality in CharGen, which has been the butt of numerous jokes, comments, and even Tshirts since its year of origin in 1977 CE.

This list of sources was used by the Traveller Wiki Editorial Team and individual contributors to compose this article. Copyrighted material is used under license from Far Future Enterprises or by permission of the author. The page history lists all of the contributions.
Retrieved from "http://wiki.travellerrpg.com/index.php?title=CharGen&oldid=687940"
Categories: