A Printing press is a machine for producing text or images.

A printing press is a mechanical device used to reproduce text or images.

An example of an early hand-operated printing press. 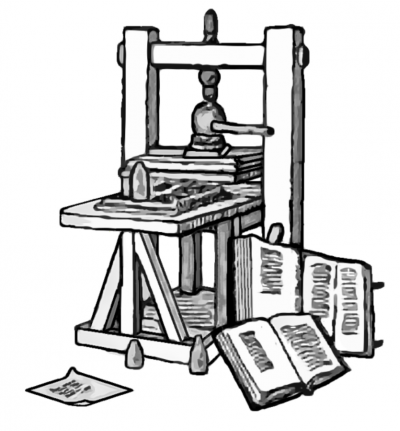 In its earliest common form, a printing press consists of a block or panel, carved with hollows and raised surfaces and covered in pigment, which is pressed against a flat sheet, typically paper or fabric. As pressure is applied, the pigment transfers from the raised surfaces onto the sheet but remains held within the hollows.

Early designs of printing press are hand-operated, but as the technology develops they become increasingly sophisticated and automated, able to cut pages to shape and bind them together into a finished book or journal.

Printing text or images allow multiple copies to be quickly made, allowing information, news, and knowledge to be shared rapidly and widely.

Governments or organizations may discourage private ownership of printing presses in an effort to control the flow of news and information.

This list of sources was used by the Traveller Wiki Editorial Team and individual contributors to compose this article. Copyrighted material is used under license from Far Future Enterprises or by permission of the author. The page history lists all of the contributions.
Retrieved from "http://wiki.travellerrpg.com/index.php?title=Printing_press&oldid=661393"
Categories: