A Mechanical Telegraph is a machine that produces signals that can be seen from long distances.

A mechanical telegraph is a type of communications equipment used for signalling using Semaphore.

It is a contemporary of the Electrical Telegraph

A schematic of a typical mechanical telegraph tower. 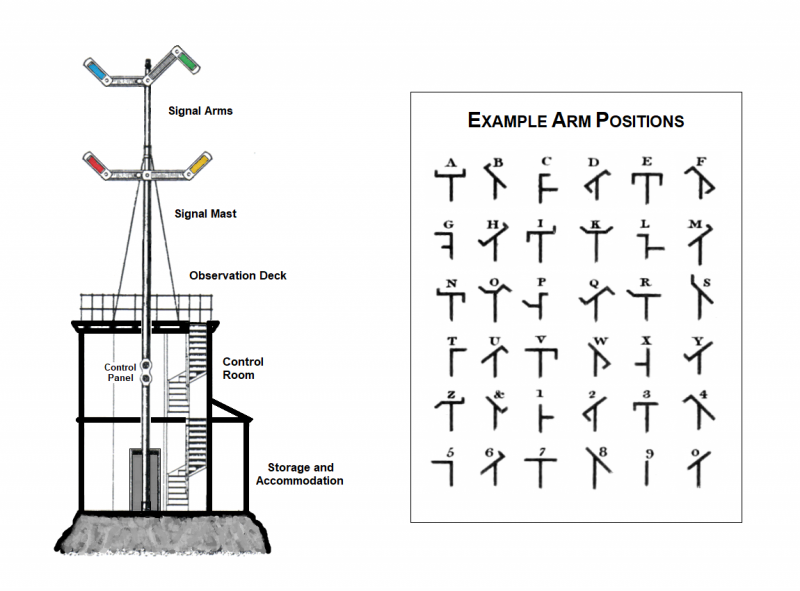 A mechanical telegraph most commonly takes the form of a tall mast mounting a number of moveable arms.

The positions of the arms signal messages to observers.

Mechanical telegraphs are often built in chains, allowing messages to be relayed between them.

A mechanical telegraph generally requires a crew of two:

The crew are skilled individuals and are required to be literate, in order to be able to read code books and record messages.

Mechanical telegraphs are constructed in easy to see locations such as hilltops or headlands. Local geographical changes (such as trees growing) may obscure a clear view.

In darkness or adverse weather, mechanical telegraphs may use other means to signal simple messages, such as fiery beacons, lamps, or bells or whistles.

Mechanical Telegraphs are commonly used by the military and by government agencies to convey orders, messages, and instructions over long distances.

Very few messages are sent in plain text. Most words and phrases are abbreviated and codes and cyphers are routinely employed.

As an important part of communication infrastructure, mechanical telegraphs may be sited within or near military facilities and may be guarded.

Messages may be recorded (commonly in big ledgers) for training and security purposes. 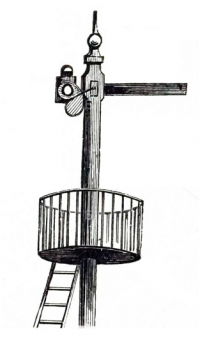 Mechanical telegraphs are used as a means to control operations on early mass transport networks such as rail systems. These telegraphs often consist of one or more signal arms mounted on a tall mast that can either be raised (permitting the vehicle to continue onwards) or lowered (requiring the vehicle to halt).

This list of sources was used by the Traveller Wiki Editorial Team and individual contributors to compose this article. Copyrighted material is used under license from Far Future Enterprises or by permission of the author. The page history lists all of the contributions.
Retrieved from "http://wiki.travellerrpg.com/index.php?title=Mechanical_Telegraph&oldid=661426"
Categories: