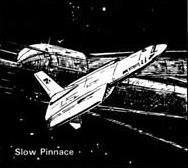 Smallcraft are where most early technology civilizations begin their spaceflight programs. By the modern interstellar age of TL:10-12, smallcraft are used as auxiliaries to larger starcraft and other interstellar FTL machines.

Big Craft are ships that weight a 100 tons or more, designed to be carried within other ships.