The revolver fires 9mm bullets with characteristics similar to those fired by the automatic pistol, but not interchangeable with them. No magazine is used: six cartridges are inserted into the revolver individually. Reloading takes a short amount of time, and even a little less time if the loader foregoes the benefit of evasion. [2] A revolver can be fitted with a silencer and a detachable shoulder stock. [3] 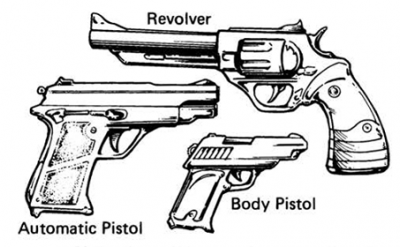 The revolver is a natural development of improved and improving ammunition technology. The Muzzle-loading Pistol leads to the Percussion Revolver, which in turn leads to the contemporary revolver, which is still a potent weapons after more than a thousand years in the field. Many revolvers are more reliable than their Automatic Pistol counterparts. [5]

Revolvers come of age in the TL:4-6 epoch and are never really considered obsolete as they remain useful well into the TL:13-15 epoch. Revolvers grow increasingly sophisticated through the epochsm including great increases in reliability and hitting power during TL:7-9 and TL:10-12. However, few models are issued to soldiery by the TL:10-12 epoch, as military personnel strongly tend to prefer Gauss Pistols and Laser Pistols. Nevertheless, the Magnum Revolver remains popular even in an age of High Energy Weaponry. [6]

This list of sources was used by the Traveller Wiki Editorial Team and individual contributors to compose this article. Copyrighted material is used under license from Far Future Enterprises or by permission of the author. The page history lists all of the contributions.
Retrieved from "http://wiki.travellerrpg.com/index.php?title=Revolver&oldid=671651"
Categories: