The KA25c Growler class Tanker is an TL–12 Tanker. It is a development of earlier tankers with lower Jump potential.

The Growler class is an auxiliary vessel of the Korsumug Empire and operated by the Imperial Korsumug Navy, based upon a Jansa design and crewed by Jaibok. 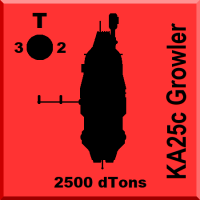 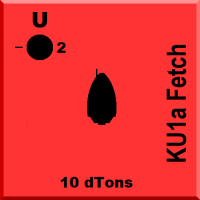 The Growler class is an auxiliary tanker with 2-G and J-3 performance. It is a large, slow ship, equipped with strong sandcaster defenses and laser turrets most commonly used in a point defense role. The design is fully streamlined, giving good atmospheric performance and enabling it to perform surface landings.

The Growler class tanker is a common type of auxiliary used by the Korsumug Empire, typically serving as a major support vessel within a patrol force or a raiding group. Examples of the class can be encountered throughout Mavuzog Sector and Theta Borealis Sector.

Early low-jump examples of the class served on the Korsumug Main, where they saw frequent active service. A number of redesigns with more powerful drives were fielded as the Korsumug Empire began to venture to worlds further from the Main. This ultimately resulted in the KA25c variant, equipped with a Jump-3 drive, though at the expense of reduced fuel tankage compared to earlier versions. 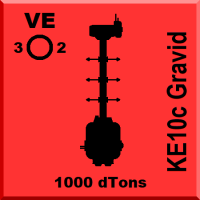 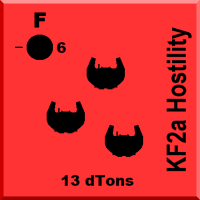 Vessel Peculiarities:
The design is capable of independent operations and can transport incidental supplies in their small holds. The vessel is primarily equipped for defense and is rarely seen without an escort, typically a Gravid class Escort Carrier, along with its protective screen of fighters. The Growler in turn provides the carrier with refined fuel.

Physiologically, neither Jaibok nor Jansa cope well with low berths and they are not routinely fitted to Korsumug vessels. Earlier variants of the class were fitted with low berths in order to transport prisoners, a feature that has been removed as internal space issues have become more pressing.

Class Naming Practice/s:
Vessels of the Korsumug Empire are given alphanumeric designations and callsigns by other interstellar states. KA refers to Korsumug Empire–Auxiliary (a designation applied to all Korsumug support units), 25 is a multiple of hundreds of tons of displacement and also indicates at a glance the number of weapons mounts, and 'c' refers to the version of the vessel, relating to its construction tech level and bracketing its maximum jump potential. Type codes will often repeat: 'Growler' is an easy to remember name to help with rapid identification.

This list of sources was used by the Traveller Wiki Editorial Team and individual contributors to compose this article. Copyrighted material is used under license from Far Future Enterprises or by permission of the author. The page history lists all of the contributions.
Retrieved from "http://wiki.travellerrpg.com/index.php?title=KA25c_Growler_class_Tanker&oldid=692207"
Categories: