From Traveller Wiki - Science-Fiction Adventure in the Far future
Jump to navigation Jump to search
Forums: Index > Watercooler > Colors in the Wiki

So a few months ago User:WHULorigan noted that the use of the Red sunburst had proliferated everywhere.

Since then it has been replaced with the navy sunburst, but to a similar effect. It is just used everywhere. So I thought it would be more interesting to have a set of colors to use in different types of articles in the wiki. A short hand to indicate type. The sunbursts are used in the Infoboxes when there are no other images available and as a substitute for articles where we don't have a infobox to begin with.

The idea would be to include these in the article as needed for placeholders. The Infobox colors for the different types would also be updated to match the color scheme so the sunbursts and the infobox colors were the same or similar.

Did I miss any colors or articles?

Brilliant idea. Nice touching up of the images as well.

I think we should wait for Wayne to respond.

I would still suggest there be a "default" color for articles that do not neatly fit into any of the categories above (or for those which are unclear and/or potentially "multi-category" - at least until an appropriate category and/or color is defined). My suggestion would be the Grey Sunburst listed above, and make the "Grey - Metadata, background, ludography" category actually a half-size grey sunburst, since those articles are about the game and/or the wiki, instead of being "proper" AAB articles. Alternatively, use the WikiNavy Sunburst at half-size for Metadata/background/ludography artciles.

Regarding Army vs. Marines: Articles go under Army (Black) unless specifically associated with Marines (Maroon). Army is general and encompasses not only Imperial Army proper, but also various Planetary Military Forces from which Imperial Army Regiments are raised. Marines are a small but elite and strictly Imperial Force.

This is a recommendation for using color as an organizational and categorization of the articles in the wiki. The fact that the colors overlap with some of the colors used for other aspects of Traveller is entirely coincidence. I thought about using pastels or neon colors for these, but Traveller really isn't a pastel or neon kind of universe.
We should select either black or grey as the color for the metadata and ludography and remove the other one.
I really don't want to add colors or designs to the list with "TBD" assigned. I'm perfectly willing to accept the idea I've missed something, which is why I'm asking now. If we come up with something missed in the future I'm quite sure we can add it, but I don't want to add things to the list just to have more colors.
The size of the list should be driven by the categorization. I have seven groups of related articles, to which I've assigned colors. And that's the order in which we should do things.
Based upon the notes above you don't have serious objections to the groupings.
I selected seven categories originally because it's the upper limit to the ideal number of items in a list. There is cognitive research showing that the upper limit of the number of items a person can keep in their short term memory is around seven (some more, some less). Tjoneslo (talk) 07:52, 29 July 2019 (EDT)

Two other points. This doesn't preclude using better images for the article where they exist. For example, the David Deitrick image used for some of the astrogation articles. Of the Maroon starburst for the actual Imperial Marine article.
I think the question ends up being Black or Maroon for the Goods and Black or Grey for the Metadata. Tjoneslo (talk) 07:59, 29 July 2019 (EDT)

What is the difference between the army (black) and marines (maroon) functionally?

I added the grey image for the metadata and Ludography. I'll start making changes to articles and templates shortly. Tjoneslo (talk) 23:25, 29 July 2019 (EDT)

Would you be willing to upgrade the grey and black-yellow images with the black outlines so they match the others?

There are two other sources of colors in the wiki:

What about non-Imperial articles? Is there a generic (possibly non-sunburst) image we can use when talking about the navy or exploration (scout) service of some polity off in Crucis Margin? (Or Datsatl/Gakghang/Thaku Fung.) Or would it be better to simply not use an image for these articles?

This also appears to be a problem, at this moment, for the Aslan Hierate (generic Aslan, no symbol), Vargr Extents (party of Vargr - granted, the Extents is a collection of polities, but e.g. 40th Squadron uses Imperial sunburst), Two Thousand Worlds (Imperial sunburst), and arguably Hive Federation (has a symbol, could be better quality).

If you have or recommend a symbol we could use, I can do the colors for them. The T5 Font set has a symbol for the Zhodani (a trefoil symbol on their page). The Aslan have a four pointed star. I would rather not use the Skull for the Vargr, so a better one for that would be appreciated. One of them there for the Hiver (not the six pointed symbol from the back of Aliens of the Rim). And another for the K'kree. But the reference I have doesn't mention which is which.

Adrian, there really isn't a standardization at Trav Map or here at Trav Wiki.

Adrian, would you be willing to create some notes collecting all the different major and minor race symbols and colors over the years?

Having thought about this a bit:

Technically, this is the "Imperial Encyclopedia" so using the imperial starburst seemed like a good starting point. The point made in the original pitch was that the starburst was to be used in places where no other image was available.
Another source of Images we could use would be the T5 Symbols font that was shipped with the T5 CD-ROM (original). I uploaded a number of these to the wiki as the next stage of this project:
* Zhodani -

I really don't like the Hiver symbol, but haven't fixed it yet. The idea would be to use these symbols with the colors to indicate, for example, the Hiver equipment, or K'kree history, or the like. Tjoneslo (talk) 10:46, 25 August 2019 (EDT)

Tjoneslo, I love it Thomas.

That's a really good question. I don't know what the dot's on the symbols are. They come that way in the Symbol font set. It's probably a good question to ask Marc or whomever built the Font. If you find out a real answers, please post it here so we all can be enlightened. Tjoneslo (talk) 14:10, 25 August 2019 (EDT)

Sure thing. He nd I have chatted about it before.

Thomas, can you shrink the symbols down to a 200 pixel width. It's bit big now and I'm getting fan complaints about it.

The Grey sunburst referenced above, but not the old grey one, has the black outline. It's hard to see at the 50 pixel size, but is very apparent at the full size. I'd like to leave the images at the size they are in the wiki and use the image size in the link to enlarge or shrink them as needed. E.g. [[File:Imperial-Sunburst-Sun-Scouts-wiki.png|250px]]. Let's let the computer do the work of sizing the images correctly.
The infoboxes are sized assuming a 300px image. It's baked into the size of the box and the text layout. But for the non-infobox uses you want the smaller images? Tjoneslo (talk) 20:22, 1 August 2019 (EDT)

Interesting. Can you tell me how these infoboxs look on your phone. Screenshots would be best, but a description would be sufficient.

Since the Infoboxes presented as examples are all about the size of the Sunburst images, I'm not convinced the just the size is the problem. I think it's more that the image is a wall of color. Let me look at adding a gradient to the images, soften them somewhat, see if that looks better. Those were an hour of work to do the first one, and 10 minutes each for the others. Tjoneslo (talk) 09:33, 3 August 2019 (EDT)

In addition to the list above we have the following Sunburst images in the wiki:

Tjoneslo, do you plan to update the black and yellow Imperial image as well?

I made my own SVG image of the sunburst for another project. I tried to replicate the 21-flame image I've seen in numerous publications. The band between the central circle and the flames runs between 63% and 70% of the size out to the extreme tips of the rings. I even tried to duplicate the shape of the flames. The SVG version has the advantage of being just over 7k, compared to about 60k for a PNG rasterization. It has the disadvantage of being not supported by this version of Mediawiki.

Here's a 50-pixel thumbnail of my 1000-pixel rasterization.

(But this small, it's hard to see much difference from any other version.)
I could share the SVG as a text file in my user space if there's an interest in it.

It is possible to enable the SVG support on this wiki, it's just not enabled by default. I would like to schedule a time to enable it as there are several potential options that may or may not work correctly. Tjoneslo (talk) 21:44, 14 September 2019 (EDT)

It's easier for us to deal with JPG, Steve.

That makes sense. On the other hand, it's probably best practice to recommend that vector illustrations be composed on vector format, and rasterized manually for the site. Then store the SVG somewhere for the time when it makes sense to enable SVG for direct use.

Would that be too obvious an idea to mention in the Manual of Style?

It's not a bad idea, but are generally not that advanced on the graphic front.

Sure, I can do the Imperial family in a 150 pixel version. Rasterizing directly from the SVG is likely to work better than rasterizing to 1000 pixels and then downsampling to 150.

If we want a consistent look throughout the site, I can do a full set from the same SVG, possibly with the gradient in the inner circle. But that will take more time than I have this week.

Here it is. I'm not sure we have a consistent file naming convention at this point, so I just used a direct description. 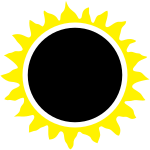 It's not as easy to rasterize manually as automatically, but it was a pretty quick task.

I wasn't aware of a naming convention. Good to know.

They are recommendations, Steve.