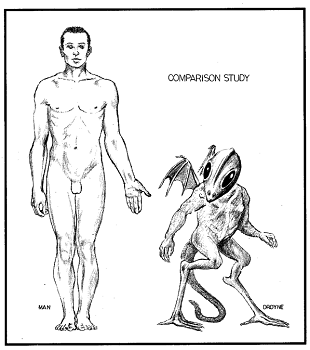 Droyne, who work in non-group roles, such as scouts, spies, and the like, tend to form personalities and individual mores based upon the soceities they are dwelling among, or upon groups looked on as normative by a Droyne in one of these roles. For instance, a Droyne working as a scout may take on the gregarious nature of a typical IISS scout from the Third imperium. Many Droyne have adopted personalities similar to the communities of Humaniti nearby, although these adopted psychologies are always tempered by the Droyne dedication to the communal ideal.

This list of sources was used by the Traveller Wiki Editorial Team and individual contributors to compose this article. Copyrighted material is used under license from Far Future Enterprises or by permission of the author. The page history lists all of the contributions.
Retrieved from "http://wiki.travellerrpg.com/index.php?title=Droyne&oldid=676347"
Categories: