The ODS class are converted from long-range paramilitary transports and carry enough internal fuel for two Jump-2s and a reserve Jump-1. They can be fitted with drop tanks as needed in order to cross larger rift zones. The design includes scoops and onboard purification for wilderness refueling, should that opportunity present itself. The craft is capable of 2-G acceleration giving good performance within the gravity wells of most gas giant worlds.

The ODS class Liner is a partially streamlined cylinder with a mean diameter of 28 meters and a length of around 130 meters. Some elements of the hull are narrower and some are wider, giving the vessel a total enclosed volume of approximately 81,000 cubic meters. 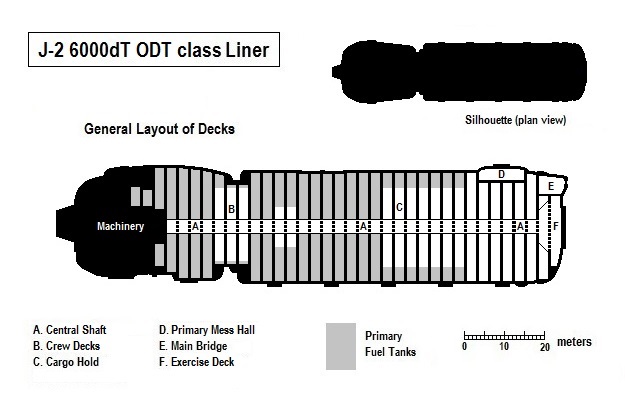 ODS class Liners are former Bright Conclave troop transports converted for use with the Orowani Deep Space Fuel Cache, a deep-space Calibration Point that was constructed to allow access to the remote Sarunt system (1939 Halcyon), the homeworld of the Treehangers. The class were originally designed to operate within the Great Void, a huge rift region lying rimward of the Distant Fringe, and as such were perfectly suited to their role.

All of the vessels used to create the ODSFC were at the end of their working lives when they were purchased. Each was prepared (primarily through making repairs and removing superfluous equipment, plus the addition of powerful communications and sensor suites) and then jumped to interstellar hex (1937 Halcyon). Since then much of their internal heavy equipment has been stripped out, while their internal drive tankage has been added to the cache's overall fuel holding capacity. None of the vessels are in good condition and entire sections are sealed off, unable to maintain internal environmental conditions.

A number of companies manufacture ships equivalent to the ODS class. They vary in hull shape and internal layout but all share the same basic design and all have very similar capabilities and performance characteristics.

This list of sources was used by the Traveller Wiki Editorial Team and individual contributors to compose this article. Copyrighted material is used under license from Far Future Enterprises or by permission of the author. The page history lists all of the contributions.
Retrieved from "http://wiki.travellerrpg.com/index.php?title=Caine_class_Troop_Transport&oldid=492452"
Categories: